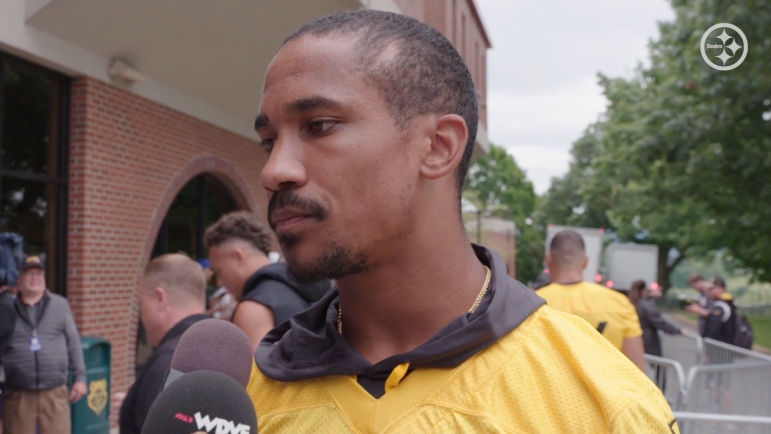 While the offense has been making strides in the ‘seven shots’ drill as training camp has progressed, it has been the Pittsburgh Steelers’ defense that has turned the tide in the two-minute drills that close practices.

Simulating an in-game scenario in which an offense is given certain parameters in which they must execute a score—generally a touchdown—the defense has gone 4-for-4 in keeping the ball out of the end zone over the past two days. Does that mean something, even in a practice setting?

“Yeah, absolutely”, starting cornerback Ahkello Witherspoon told reporters yesterday, via the team’s website. “Those are the moments that win the game. . .If you could win those moments on a Monday in August, then we can carry that over into the season”.

In-game, things could have gone better for the defense, for the most part. The Seattle Seahawks went 3-for-4 in their trips inside the red zone on Saturday night, and 2-for-2 in goal-to-go circumstances. They led a touchdown drive before the half with just 1:48 to play, taking the ball 61 yards with four first downs after a good punt return.

The defense did close out the game better. The Seahawks had one true possession in the closing minutes, and it lasted all of one play, with a strip-sack that set up Kenny Pickett and the offense for the game-winning drive.

That, of course, is the beauty of playing an actual game. The success of your own defense doesn’t mean the failure of your offense, and vice versa. Indeed, the two should work together as they did in the closing minutes against the Seahawks, which made the difference in the game.

Throughout camp, it has been a spirited tug of war between the offense and defense, particularly in the two-minute drills. The offense held the upper hand early on, but the defense is now closing the gap, and that’s what their focus is on as a unit.

“It’s been such a long camp, I don’t think we really have recollections of the previous ones”, Witherspoon said. “I think more just getting better and improving in that moment. We know we have those scars of losing on those other days, so it’s just time to stack some Ws”.

Of course, it’s the ‘seven shots’ drill for which the winning side is awarded steak and lobster for dinner. Witherspoon and his crew had that meal on Monday evening, but yesterday, it was the offense dining well as we near the close of training camp.