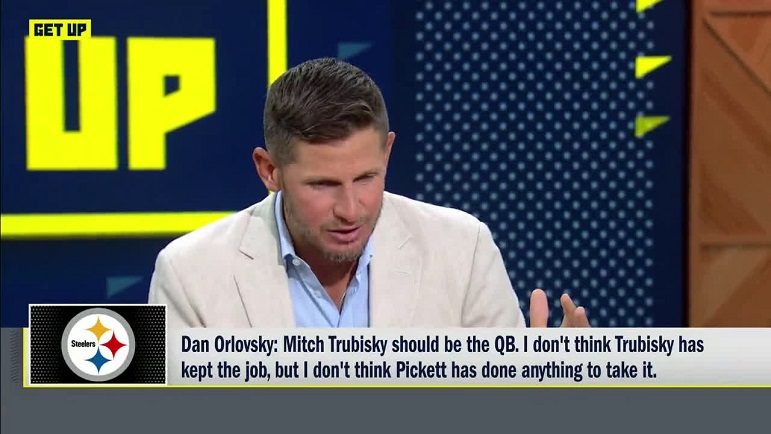 For all the positive talk surrounding the quarterback competition for the Pittsburgh Steelers and the strong play that was put on display throughout the preseason by Mitch Trubisky, Kenny Pickett and Mason Rudolph, former NFL quarterback and current ESPN analyst and Monday Night Football analyst Dan Orlovsky believes it won’t matter who is under center in the Steel City, and not for the reasons you may be thinking.

Orlovsky, appearing on ESPN’s Get Up! Monday morning with host Mike Greenberg, stated that while he believes Trubisky did enough to win the job, it won’t matter whom head coach Mike Tomlin goes with under center between Trubisky and Pickett because there are major issues elsewhere offensively that will ultimately derail the Steelers, at least in Orlovsky’s mind.

One of those glaring issues remains the offensive line, which the Steelers attempted to throw money at this offseason with the signings of Mason Cole and James Daniels in free agency. So far, returns on the offensive line under first-year position coach Pat Meyer are underwhelming, which has Orlovsky very concerned moving forward, regardless of who is under center.

“The starting quarterback should be Mitch Trubisky. That being said, I don’t think Mitch Trubisky did anything to give this job away, but nor do I think that Kenny Pickett did anything to go take it from him,” Orlovsky said, according to video via ESPN’s Get Up! Twitter page. “Mitch Trubisky has been relatively better pushing the ball downfield. Really good kind of end of the preseason performance.

“Here’s the reality though, for the Pittsburgh Steelers and this is the truth: It don’t matter who your quarterback’s gonna be, OK? Your offensive line still is not very good. Your offense looks the same as it did last year. We’re gonna throw a bunch of short passes and then we’re gonna take some go shots on the outside,” Orlovsky added. “Either quarterback is gonna be playing under duress. So they’ve got issues no matter who the quarterback is. I think you start Mitch Trubisky, see what happens and you feel relatively good if it doesn’t go well, Kenny Pickett’s gonna be the guy to step in. And I think he’s mature enough to handle that transition.”

.@danorlovsky7 thinks the Pittsburgh Steelers have problems beyond QB1 👀

It’s hard to disagree with much of anything Orlovsky said, at least from the offensive line perspective.

At both tackles, Dan Moore Jr. and Chukwuma Okorafor looked rather rough overall against the Detroit Lions in the preseason finale at Acrisure Stadium Sunday afternoon. Both struggled to protect Trubisky, and with the inability to really develop a strong rushing attack to slow down the pass rushers, it could be a long season for whomever is under center.

As Orlovsky states, ideally it’s probably best to have Trubisky start the season and see what happens. There’s no real future investment in Trubisky, so it’s better to throw him to the wolves behind a poor offensive line than it is your long-term investment in Pickett, even if the rookie precesses a bit better and quicker than Trubisky.

Throughout the preseason there were flashes of pushing the football down the field in the second year of offensive coordinator Matt Canada’s scheme, but it still feels a lot like throw short, run long, which isn’t sustainable. Maybe a lot of that is due to the protection issues up front, but there’s not a lot to feel great about offensively right now with the black and gold due to the major question marks in the trenches.