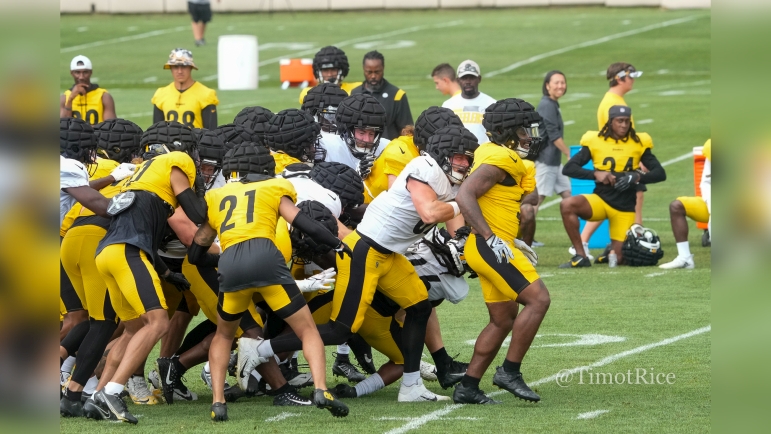 Pittsburgh Steelers head coach Mike Tomlin installed live tackling drills in training camp in 2013, the first time in more than a decade, if not a fair bit longer, since the team had last done that. It was largely a direct byproduct of the Collective Bargaining Agreement signed in 2011 that greatly limited what teams can do in practice. And there’s a simple philosophy behind it, as defensive coordinator Teryl Austin explained to Pat Kirwan, Jim Miller, and Paul Alexander on SiriusXM’s Movin’ the Chains program earlier this evening.

“We do that because it’s like anything; you can’t be upset with a player when he doesn’t do something but you don’t practice it”, he said. “The whole idea is, if we want to be a good tackling team, we’re tackling. It we want our corners and our secondary to support the tackle, they gotta tackle. We can’t not tackle and then when we get in the stadium, say, ‘Hey, you gotta tackle that guy’”.

Now, practice doesn’t always make perfect, of course. I don’t think anybody would accuse the Steelers of being the sharpest-tackling defense in the NFL, although for as bad as they could be at times, especially last year, there are a number of teams who are even worse. And a lot of that does have to do with the scarcity of tackling that teams are doing leading up to the games that count.

“We work on the things and the skills that are relevant to playing football, so that’s why we tackle in camp, and I have no problem with it”, Austin, a Pittsburgh native, told the program. “I think it’s a great idea. We don’t do 9-on-7. We do team run, because we want everybody involved, because everybody has to tackle”.

As he was the one who installed the live tackling himself, you might expect that Tomlin had something to say about it, as well, and indeed, he did, as the head coach appeared on the program a bit earlier in the evening, and he did touch on the topic.

“We tackle every day we have pads on. I just think it aids and accelerates, not only in the development, but the identification of talent”, he said, explaining how it’s a benefit to both sides of the ball using the running back position as an example. “I’m not speculating about runners and their ability to make piles fall in the right direction, because those piles are falling in the right or wrong direction”.

It’s a great way for somebody like rookie college free agent running back Jaylen Warren to help himself stick out. Though it’s not technically a live tackling drill in the sense we’re talking, Warren was first noticed from the backs-on-backers drill, perhaps the most violent exercise of the whole training camp process.

One thing I’m confident about is that you don’t get worse at tackling by practicing it. The Baltimore Ravens are taking the opposite approach this year and going for lighter practices. Injuries, of course, are an increased concern when you raise the contact level, but it also prepares you for the violence to come when it actually matters.