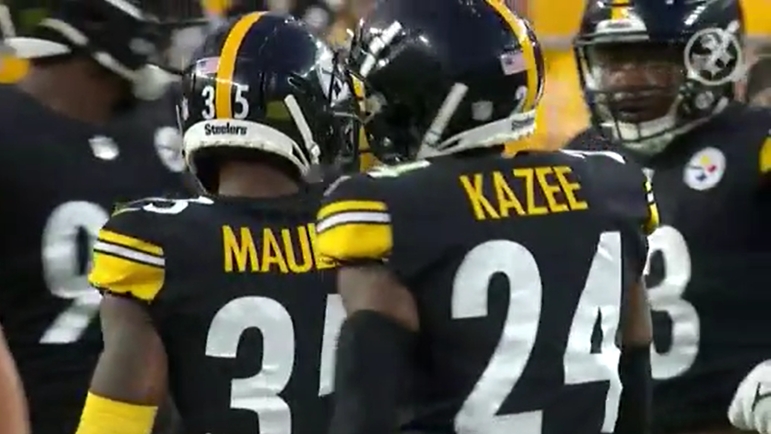 The Pittsburgh Steelers entered the offseason targeting three different safeties, including their own free agent, Terrell Edmunds. They ended up signing two of them, with Edmunds returning shortly before the draft, and then adding Damontae Kazee shortly after it.

While Edmunds remained confident that he would retain his starting job, however, that doesn’t mean it will keep Kazee off the field. Indeed, the veteran starter has had the opportunity to run with the first-team defense quite a bit thus far, when Minkah Fitzpatrick has been off the field. He started the first preseason game when Fitzpatrick did not play, and replaced the All-Pro in the middle of the second quarter while the other starters other than T.J. Watt were still in the game.

Kazee’s first snaps in Fitzpatrick’s spot came late in the second quarter, the second of which resulted in an offensive holding call, and so didn’t officially count. Truth be told, the first was a run play that went nine yards up the middle. The second play, which did not count, forced an incompletion. They would eventually get off the field without giving up another first down.

“Just having Kazee back there, he’s a veteran guy, he’s a guy that knows how to play in the NFL, he’s a guy that made big plays in the NFL”, Edmunds said about adding another experienced veteran safety to the room. “He’s definitely someone that’s gonna help us out big time”.

Still, there are a lot of things for the defense to work out—such as whether all three safeties will be on the field at the same time. The Steelers actually have an array of options for their sub-package participants, starting with either Ahkello Witherspoon or Levi Wallace, whoever loses the starting job. Arthur Maulet is listed as their nickel defender on the depth chart that Tomlin would stress is meaningless. And then there are Kazee and Tre Norwood as two versatile safeties who can move around.

Asked if Fitzpatrick would move around more this year with Edmunds and Kazee also able to play, as he had been moving around in Saturday’s game, the veteran safety said, “We don’t know. That’s a good question for Coach Tomlin and [Teryl Austin]. They can really tell you more about that, but right now, we’re just gonna go with how they put him in the game and we’re just gonna go off of that”.

We haven’t quite gotten the chance to see it yet, but I would imagine that we will see Fitzpatrick, Edmunds, and Kazee all on the field at the same time at some point. The Steelers employed a variety of different members of the secondary at the start of last season before they settled on a couple of staple groupings. This year could be similar, only less out of necessity than luxury.