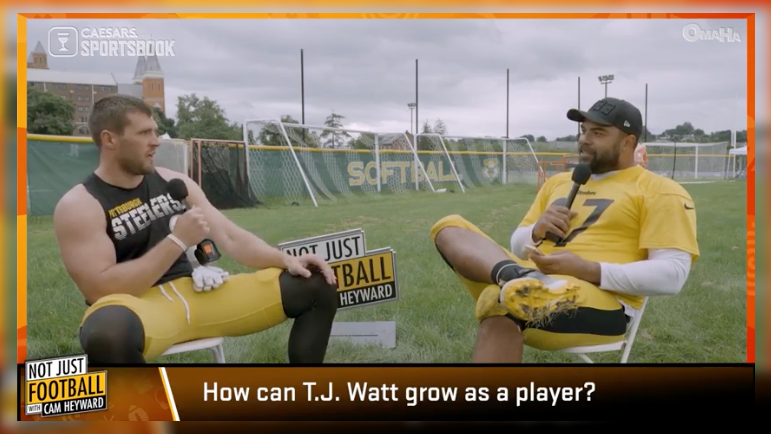 Early on in his career with the Pittsburgh Steelers, star outside linebacker T.J. Watt was all ball, all the time, so focused on getting better at his craft and seemingly needing to uphold the standard that came with his last name in the NFL.

Doing that made him a bit of a “lone wolf” as he describes it, but now feeling much more comfortable in his role and belief in his abilities, Watt is aiming to become one of the “guys” on the team, shedding that lone wolf personality to become more accessible. At least, that’s what he’s aiming for this season, he said to teammate and close friend Cameron Heyward on Heyward’s “Not Just Football with Cam Heyward” podcast from Saint Vincent College in Latrobe earlier this week.

Watt brought up wanting to be around teammates more and hanging out and being that leader when asked what he needs to improve on as a player one season after winning the NFL’s Defensive Player of the Year Award.

“Yeah, I think that’s a question I’ve been asked a lot this offseason. I think for me, it’s just about being more consistent, not only just in my play, but as a leader, and it starts with just like off the field stuff too, or just trying to be around guys more and trying to hang out whether we’re playing Scrabble or rolling dice or playing cards,” Watt said to Heyward, according to video via the NFL on ESPN YouTube page. “I just wanna be a part of the team more. Obviously, I was kind of more of a lone wolf my first couple years and I think it was just because I was so focused on…I didn’t wanna mess up.

“And now that I’m more comfortable in my role, I want to be more of a leader and help younger guys out and not be a stranger as much as I have been in the past.”

That’s quite the thoughtful answer from Watt, honestly. For many players when they’re asked how they can improve after a dominant season, it’s often little things on the field like hand usage, or flexibility, or anything the players can kind of concoct to just answer the question and move on without getting too deep into the weeds.

Not for Watt though. His answer to Heyward was really interesting, as he was mostly that lone wolf “all ball, all the time” guy that didn’t seem to hang out with anyone off the field (at least that was shown publicly) and was really that quiet, reserved player overall.

While it’s a stretch to think he could become that rah-rah guy for the Steelers, having him be more of a presence off the field for teammates could be significant for the Steelers, especially younger players that are trying to emulate his work ethic and commitment to the game overall. It doesn’t hurt to have some light moments overall, like playing Scrabble (which Watt is admittedly terrible at) or rolling dice with teammates.

Sometimes players need that, and it sounds like Watt now understands that and isn’t afraid of messing up or not being overly perfect anymore. He’s comfortable in his own skin and confident in his game, which could really unlock a great leader for the Steelers moving forward.