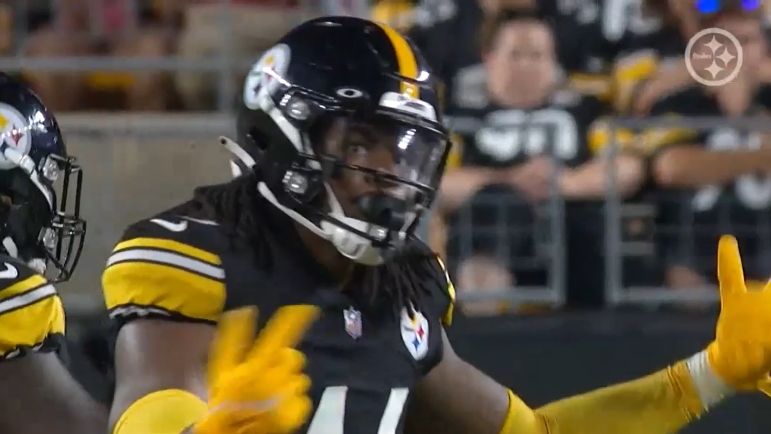 Count star Pittsburgh Steelers outside linebacker T.J. Watt as one of the latest believers in second-year pro Hamilcar Rashed Jr.

Rashed, who appears to be in line for a spot on the 53-man roster as a depth piece behind the reigning 2021 NFL Defensive Player of the Year in Watt, earned some praise from the All-Pro pass rusher Thursday ahead of the Steelers’ preseason finale against the Detroit Lions at Acrisure Stadium.

“He has a good juice to him, plays the run well,” Watt said of Rashed, according to Steelers.com’s Teresa Varley. “He also shares the same outside ‘backer coach I had in college. Just to be able to translate some things what we called it in college and what we call it here has been nice. I think he has a good juice, a good pass rush package as well and I think he can do some good things for us.”

Rashed came on strong last week against the Jacksonville Jaguars on the road, recording a team-high grade of 83.3 against the run, according to Pro Football Focus. He showed good use of hands, was able to stack and shed against blockers, and consistently was around the football defending the run.

Though he didn’t quite flash that juice as a pass rusher that Watt praised him for, Rashed did record 14 sacks as a junior at Oregon State in just 11 games in 2019. Despite the strong junior season, Rashed then fell off in 2020 during a COVID-shortened season, leading to him going undrafted. He landed with the New York Jets as a UDFA.

After one season on the practice squad that featured an elevation to the active roster for one game, Rashed was waived in mid-August before landing with the Steelers.

Now, after Pittsburgh surprisingly cut veteran edge Genard Avery, Rashed has a real opportunity in front of him to latch on in the Steel City behind Watt and third-year pro Alex Highsmith.

The ability to rush the passer is there, without a doubt. He has all the tools necessary to be a serviceable No. 4 on the roster behind Watt, Highsmith and, presumably, Derrick Tuszka. It is pretty interesting that the same OLB coach Watt had at Wisconsin (Cort Dennison), Rashed had at Oregon State, which has helped the young player jump onto the moving train rather quickly.

As gets more comfortable within the scheme and the team dynamics, it will be interesting to see if Rashed can tap into that potential he showed as a junior at Oregon State. That player could provide a huge boost to the Steelers’ depth chart on the edge.