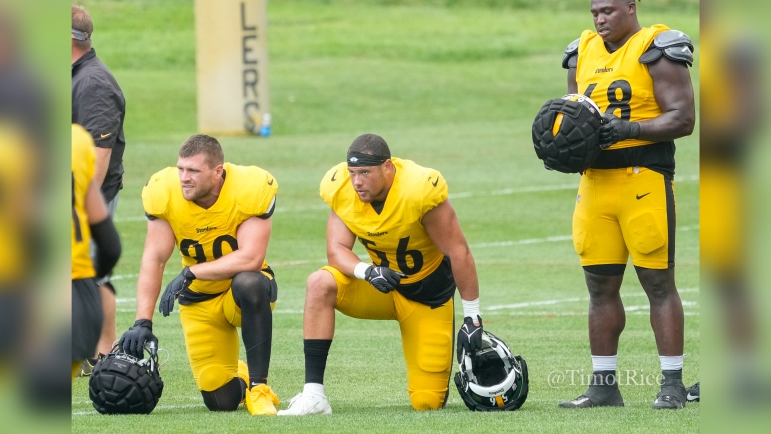 Based on some analytics and overall numbers crunched by computers at ESPN, Pittsburgh Steelers star outside linebacker T.J. Watt — the NFL’s reigning Defensive Player of the Year — will lead the NFL in sacks once again.

In an article published Saturday morning, Watt — who recorded 22.5 sacks in 2021 to tie the NFL’s single-season sacks record with Hall of Famer Michael Strahan — is projected to once again lead the NFL in sacks, though he won’t come close to putting up the numbers he did last season.

According to ESPN’s sack total projection for the 2022 season, Watt is projected to record 12.8 sacks in 2022 thanks to a number of criteria used by ESPN’s stats and analytics team. Those criteria include: sack totals and rates over the past two seasons; projected snaps, courtesy of ESPN’s Mike Clay; Pass rush win rate (PRWR), which uses player tracking data from NFL Next Gen Stats; how often a player’s defensive coordinator/head coach has blitzed in the past; how often opposing quarterbacks on each player’s 2022 schedule get sacked; a player’s team’s win total, which matters because a winning team forces opponents to take greater risks and pass more; and how often a player rushes from edge (as opposed to the interior).

That’s a lot, I know, but all those numbers used have Watt finishing nearly one full sack ahead of Cleveland’s Myles Garrett in second with 12.1 projected sacks in 2022.

“Watt’s incredible 2021 campaign saw him tie Michael Strahan’s single-season sack record. And despite the math we’re doing, the simplest reason — his superb production in recent seasons — is the most important in forecasting a strong 2022,” ESPN’s Seth Walder writes. “To put Watt’s effectiveness in more context, not only did he record 6.5 more sacks than Myles Garrett, the No. 2 player on this list, but he did so on more than 100 fewer pass rushes.

“But his sack total isn’t the only reason he’s at the top of this list. Watt backs up his sack success with effectiveness in pass rush win rate, as he led the league in 2020 and was fifth among edge rushers last season.”

Put simply, Watt is the NFL’s best pass rusher at any position. He wins at an elite level, does so in few reps, and far exceeds anyone else’s sack numbers in the NFL. If he can stay healthy in 2022 playing in a rebuilt Steelers defensive front, there’s a great chance the star again leads the NFL in sacks, though at a much higher number than the 12.8 the computer projects.

Aside from Watt, the only other Steelers to crack the top 50 in ESPN’s projections is third-year outside linebacker Alex Highsmith, who comes in at No. 46 overall in the projection with 5.6 sacks projected for this season.

Much like Watt’s projection, that seems rather low for Highsmith, who recorded 6.0 sacks last season alone. Entering his third season with plenty of experience and a full repertoire of pass rush reps, Highsmith is poised for a huge breakout in 2022, which will include a higher number than just the 5.6 projected by ESPN.

Surprisingly, All-Pro defensive tackle Cam Heyward, coming off of a 10.0-sack season in 2021, did not crack the top 50 projections from ESPN, which bottomed out at 5.4 sacks projected for New York’s Carl Lawson.