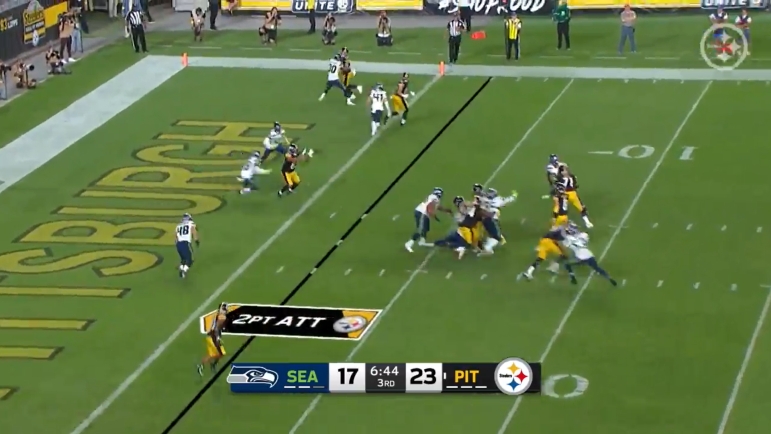 At the beginning of the second half, rookie QB Kenny Pickett got the nod to enter the game after Mason Rudolph and Mitch Trubisky played split the first half of action. Both passers looked crisp in their brief showings, moving the offense down the field and getting them into the end zone by each throwing a TD pass to cap off a successful preseason debut.

Pickett looked to do the same in his first NFL action after Pittsburgh selected him #20 overall in the 2022 NFL Draft. Pickett would go on to complete all five of his pass attempts for 33 yards and capped it off with a TD pass to RB Jaylen Warren and a successful two-point conversion to TE Connor Heyward.

When asked about his thoughts on Pickett’s first drive in the NFL, WR Steven Sims made sure to give Pickett the love after he came in and took command of the offense.

“Yeah, he was rolling on that drive,” Sims said in the locker room after the game on video from Pittsburgh Tribune-Review’s Chris Adamski. “I helped him out a little bit on the jet sweep, but he got his feet wet with the little out route in the flat and we went from there. Kenny looked really comfortable in the pocket, looked really comfortable today, and we’re going to see big things from him.”

Steven Sims on how all 3 Steelers QBs had a good game, and especially on Kenny Pickett pic.twitter.com/M91yPM6B1J

Mike Tomlin has stressed that he wants his starting QB to make the routine plays routinely. That means being able to complete passes, move the offense into position to put points on the board, and avoid turnovers. Check all three of those boxes off for Pickett last night, after he went 13/15 for 95 yards, two TDs and zero INTs while adding 16 rushing yards on the ground.

There were moments where Pickett held onto the ball too long and needed to lay with more heightened awareness, but for his first actions in the NFL, it was a strong performance. While saying this, Rudolph and Trubisky also played well, thus making the QB battle in Pittsburgh that much more of a debate going forward.

While Trubisky may sit in the driver’s seat at this moment, Rudolph and Pickett as actively making their own claims as to why they are deserving of the starting job. Thankfully, we will get the opportunity to watch all three in the next two preseason games and see who separates themselves from the pack.

Really good stuff here from @Alex_Kozora taking a look at Kenny Pickett's debut for the #Steelers, via @Steelersdepot