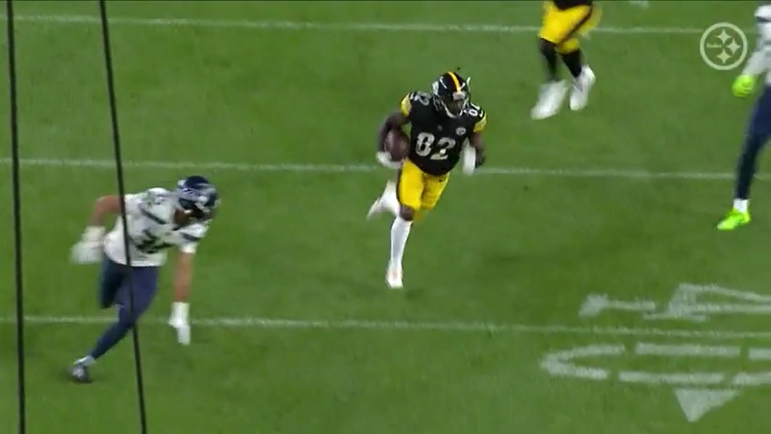 Entering his final opportunity to make a case for a spot on the 53-man roster or the practice squad in Pittsburgh once again, Steelers veteran wide receiver Steven Sims — a veteran of 29 career NFL games — is focused on doing the one thing he knows how to do: make plays.

Speaking with reporters from inside the locker room at the UPMC Rooney Sports Complex on the South Side Friday following practice, Sims – who is in a battle with the likes of Tyler Vaughns, Cody White, Myles Boykin, and Tyler Snead for a spot on either the 53-man roster or the practice squad — said his focus is on just consistently making plays, which is what he’s done through two preseason games to date.

“(I want to show) that I am going to be consistent making plays when the ball is in my hand,” Sims said to reporters Friday, according to video via Steelers.com. “Doing whatever (special teams coordinator) Danny (Smith) asks me to do in special teams. Just continue to do that. Make plays on offense, block and make plays on special teams as well.”

Through two preseason games, Sims has made plays for the black and gold. A 38-yard punt return against the Seattle Seahawks set up Mason Rudolph’s 26-yard touchdown to rookie wide receiver George Pickens. Then, on the second play of the second half against the Seahawks, Sims raced 38 yards through the heart of the Seattle defense on a jet sweep, showing the Steelers just what he could do.

Things cooled off just a bit in the second preseason game on the road against the Jacksonville Jaguars for Sims, who had one carry for 11 yards, and added two catches for nine yards on two total targets.

With plenty of NFL experience, Sims has a bit of a leg up in the position battle against some of the younger players like Snead and Vaughns, though Vaughns has had a great training camp and preseason and appears like a lock for the practice squad, should he make it through waivers after final cuts.

In the Steelers’ offense under second-year coordinator Matt Canada, Sims’ versatility as a boundary or slot receiver and a runner with the football makes him a solid fit overall, one that can also play on special teams and could be called up to the 53-man roster in a pinch throughout the season, just like he was for a game last season for the black and gold.

Steven Sims on how all 3 Steelers QBs had a good game, and especially on Kenny Pickett pic.twitter.com/M91yPM6B1J

That fit in the offense has him excited to see what he can do Sunday against the Lions in the final chance for him to make a case to stick around in Pittsburgh.

“I can run routes, good routes in the slot, outside, and I return the ball,” Sims added, according to video via Steelers.com. “And you can put it in my hand in the backfield. I love his offense and I think I am a good fit for his offense. We’ll see what happens this weekend.”

Based on the way he’s performed this summer for the Steelers, there’s a good chance he makes a big play or two against the Lions, further stating his case to the decision-makers in the Steel City.