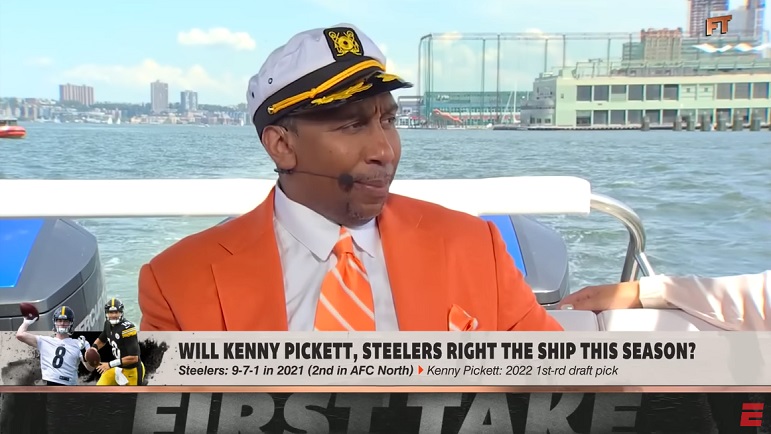 From hiring a new General Manager to a new quarterback room, the Pittsburgh Steelers are coming off an offseason with an unusual degree of change. As such, many question the team’s ability to make the playoffs, especially in a growingly competitive division and conference in the AFC North and AFC. Stephen A Smith of ESPN, a self-proclaimed die-hard Steelers fan, weighed in on this on First Take Monday.

“I don’t think so,” Smith answered when asked by Molly Qerim whether the Steelers will right the ship this coming season. “You know I’m a diehard Steelers fan, I love them. Kenny Pickett’s the future, I love what I saw in his first preseason game. He completed his first ten passes, six straight on his first drive. He was impressive, we know this. Do I believe in Mitch Trubisky? Hell no, but you got him for $14.5 million guaranteed. The one thing I do like is that, and I don’t mean any disrespect, Ben Roethlisberger is a Hall of Famer, we know this, but he was a stationary target. He couldn’t move, Mike Tomlin admitted that. So, we understand that. Now you’ve got mobile quarterbacks.”

Smith, like many Steeler fans, is not sold on Trubisky. In fairness, the former Chicago Bears quarterbacks’ career has not been up to the standards of a second-overall pick thus far and needs to prove himself.

Tomlin indeed made several comments regarding his desire for a mobile quarterback for the 2022 season. While they are by no means run-first quarterbacks, Pickett and Trubisky certainly add quarterback mobility to Offensive Coordinator Matt Canada’s offense, at least more so than before. However, it’s important to note that the data does not necessarily indicate that Canada’s offense requires a mobile quarterback to succeed. That said, adding this facet to the offense is hoped to improve the run game, which the team desperately needs. Smith goes on to elaborate on why he does not believe the team will make the playoffs, emphasizing the significance of improving the rushing offense.

“If you can run the football, and your quarterbacks can run with the football,” Smith continued. “And they don’t turn the ball over, then you’re talking about a team that’s led the league in sacks the last five years in Pittsburgh. So, I don’t think they’re coming the last place. Somebody will fall beneath them, but do I think they’re going to make it to the playoffs? I hope I’m wrong, but I don’t think so.”

If the 2022 Steelers have an effective run game, they will not be an easy team to beat. An effective run game is a significant asset that this team has been missing for years, as it both controls the clock and allows play-action opportunities for the offense. Paired with a defense that has led the league in sacks the past five seasons and added several key pieces among the front seven in the likes of linebacker Myles Jack and defensive tackle Larry Ogunjobi, the Steelers will be no pushovers. After all, as hard as it may still be to believe, the 2021 Steelers made the playoffs despite ranking in the bottom four in rushing offense.

It remains to be seen how much the run game will improve. However, with the additions of guard James Daniels and center Mason Cole presumably improving the offensive line, as well as adding quarterback mobility, it’s safe to predict an at least marginal improvement from the bottom four. Not to mention, second year running back Najee Harris is poised to embrace the work-horse role.