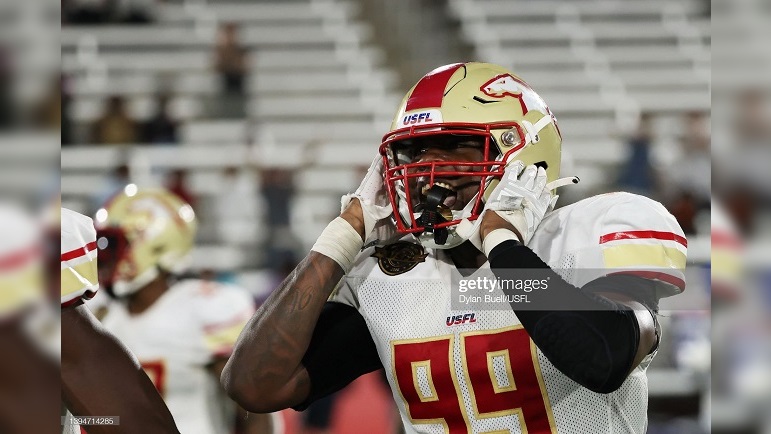 Along with Ron’Dell Carter, who the team signed, the Pittsburgh Steelers also worked out former Indiana (PA) and Birmingham Stallions defensive lineman Dondrea Tillman, per a tweet from Pro Football Network’s Aaron Wilson.

Tillman registered 28 sacks and 172 total tackles in his time playing for the Crimson Hawks. He was also a two-time All-PSAC West selection. He also had two defensive touchdowns, including a 51-yard interception return for a touchdown.

In the USFL, Tillman had 36 tackles and 2.5 sacks for a Stallions team that finished 9-1 and won the USFL Championship. Given Tillman’s local ties with his history at IUP and play in the USFL, it makes sense the Steelers would work him out in the wake of T.D. Moultry’s injury.

Tillman also spent time in The Spring League in 2021 with the Conquerors before he joined the Stallions. It’s not the first time Tillman has worked out with the team either, as he worked out with the team in July when they ended up signing defensive tackle Doug Costin. After two workouts with the Steelers, the team is likely aware of his skillset, and it’s possible that he can be a potential option down the line if there’s another camp injury at EDGE this offseason.

It’s interesting that the team brought Tillman back for the second workout, and it shows that they may have been interested in him the first time he worked out for the team. It would seem unlikely that he’s a guy they bring in after he went unsigned a second time, but if something happens to an EDGE in the next week or so, he could be brought in just due to the team’s familiarity with him.

If he was signed, Tillman would’ve been the second player who played his college ball at IUP to play for the Steelers, as he would join wide receiver Dave Smith, who played two-and-a-half years with Pittsburgh. In 1971, Smith led the Steelers with five touchdown receptions.