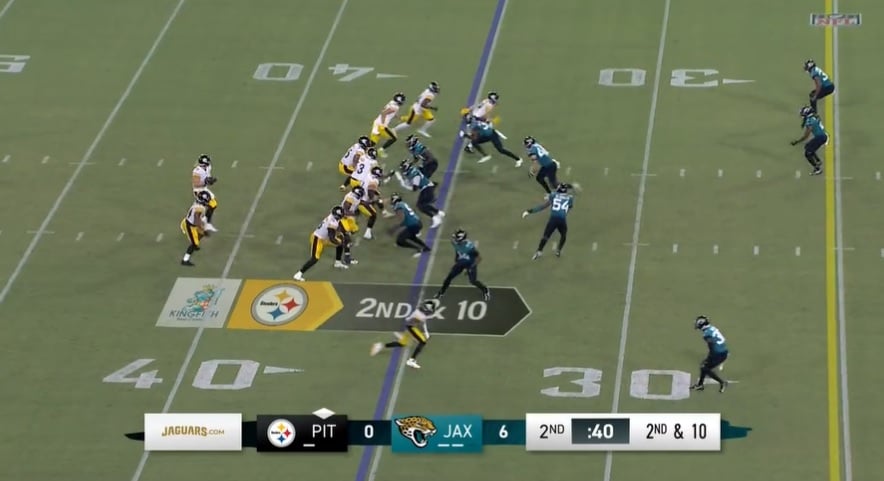 Winners and losers from the Pittsburgh Steelers 16-15 win against the Jacksonville Jaguars in Saturday night’s preseason contest.

Kenny Pickett: It’s impossible to deny the job Pickett’s done the last two weeks. With the Steelers’ offense looking lifeless for the first 29 minutes, Pickett ran the show to close out the half. In situational ball nearly identical to what you’d see in camp, just over a minute on the clock and about 60 yards to the end zone, Pickett was excellent. He went 4/5 for 63 yards and a touchdown, his only incompletion a spike and he threw a touchdown to Diontae Johnson that was wiped out by penalty. Pickett was at his best against the blitz and effectively attacked the middle of the field, standing tall against A and B gap pressure. He put points on the board. That was all Mike Tomlin needed to see and Pickett didn’t start the second half.

Terrell Edmunds: Edmunds didn’t necessarily make high-level plays but he was active at the line of scrimmage against the run. He finished the night with five tackles, four of them solo. If he can be solid against the run and not a liability in coverage, that’s a win for Pittsburgh.

Chase Claypool: Claypool primarily ran in the slot, reflecting what he’s done when healthy throughout the summer. That poses a challenge for DBs in this “big slot” world, especially vertically. Claypool found the ball on a slot fade early in the game, jumping over the defender’s back to haul the pass in for a 29-yard gain. There’s questions about his ability to run short option routes and make touch catches in traffic but he could be a downfield weapon inside this season.

Pat Freiermuth: Freiermuth was his typical, sure-handed self, nothing new there, but what is new are his downfield catches. He finished the day with two catches for 35 yards, both in the two-minute drill, with one being a 24-yard completion. That would’ve tied his long last summer. Freiermuth’s been used down the middle of the field more often this summer and he should be able to raise his paltry yards-per-catch figure from his rookie season.

Mark Robinson: Solid game for Robinson whose run fits were sound and he stayed clean in the run game. He finished the game with a monster hit over the middle and didn’t look as uncomfortable in coverage as he did in his NFL debut last weekend. He plays with the mentality all good Steelers’ linebackers have had.

Tyler Vaughns/Tyler Snead: Good outings for the Tyler wideouts. Vaughns created space by selling vertical while Snead was an effective option out of the slot, catching the go-ahead touchdown late in the fourth quarter. Both guys are fighting for a spot on the practice squad and helped their causes tonight.

Dan Moore & The Offensive Line: Mike Tomlin wanted to see how the Steelers’ o-line would respond against the Jags’ varsity pass rush. Pittsburgh’s front five was JV. Mitch Trubisky was under siege the entire first drive and things didn’t get much better throughout the day. Moore was the most noticeable weak link but there wasn’t a strong chain in this group. Again, Chukwuma Okorafor may have been the team’s best offensive lineman. More played deep into the third quarter, a sign of his struggles and coaches wanting to give him as many reps as possible. Starter Kendrick Green rotated with Kevin Dotson and played well into the fourth quarter. And if anyone is calling for John Leglue, his pressured resulted in a Mason Rudolph intentional grounding safety.

Pittsburgh struggled with the Jags’ line stunts and twists. Run-blocking wasn’t any better with linebackers running free. James Daniels continues to struggle, too. It’s a good thing the Steelers have mobile quarterbacks. They’re going to need to use their legs this year. A lot.

Finding starters this time of year will be tough but bank on Omar Khan and the pro scouts to add more o-line help before Week One.

Chris Boswell: Nitpicking here and this isn’t a cause for concern. But Boswell hit the upright from 53-yards out on his first attempt of the season while barely sneaking in an extra point later in the game. Let’s just call it some summer rust.

Anthony McFarland: Evaluating his play is difficult behind a woeful offensive line but the pecking order didn’t work in McFarland’s favor. He was the third running back in the game and didn’t see regular snaps until the second half, playing squarely behind Benny Snell and Jaylen Warren. McFarland was little-used the final week of camp and odds are good Warren has passed him by. Warren offers more special teams value, is better in pass protection, and fits the profile of a powerful runner the team is attracted to.

QB Contain: Jacksonville has a couple mobile-enough quarterbacks and they made plays with their feet. Pittsburgh’s rush struggled to plug things on the edges and up the middle. Starter Trevor Lawrence rushed the ball twice for 13 yards while C.J. Beathard had a short rushing square early in the fourth quarter. Pittsburgh will see mobile quarterbacks all season, especially in their division, so improvement there will be key.

Tre Norwood: While Norwood didn’t seem awful tonight, he certainly didn’t build upon his strong debut. Norwood missed multiple missed tackles in the pass game tonight and will probably show up quite a bit in Josh Carney’s missed tackle report, an article you don’t want your name in. Norwood’s shown more physicality than his rookie season but he lacks size to thump and falls off to easily when he can’t come downhill and hit a runner squarely.