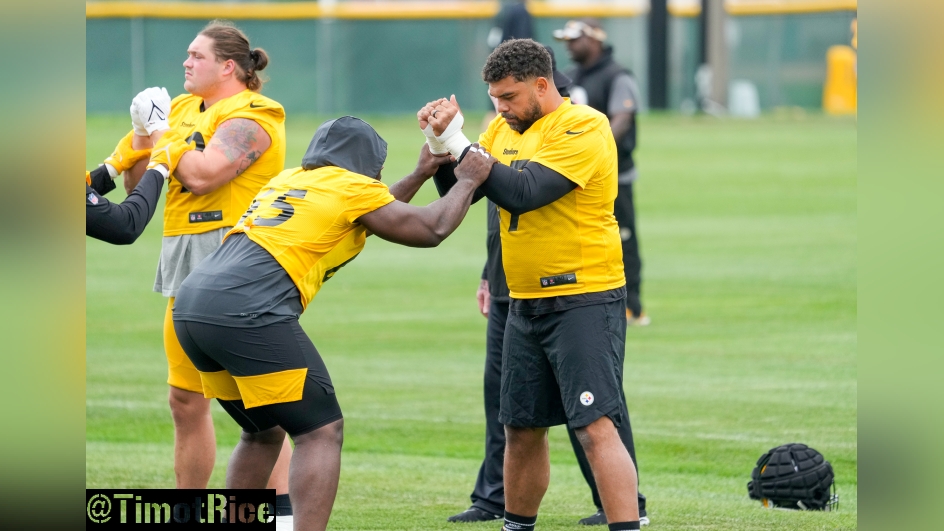 Five full practices into training camp at Saint Vincent College in Latrobe on Chuck Noll Field and the Pittsburgh Steelers are already trying to manage reps and bring players along slowly, especially those dealing with injuries.

New free agent signee Larry Ogunjobi is one of those players the Steelers are trying to be smart with and manage reps early in training camp. Ogunjobi, who signed in late June on a one-year deal, is coming off of a Lisfranc injury suffered in the Cincinnati Bengals’ playoff win over the Las Vegas Raiders, knocking him out for the rest of the playoffs in a year in which the Bengals went on a run to the Super Bowl.

Film Room: A deep dive into the good and bad of Larry Ogunjobi's run defense via @J_Heits. #Steelers https://t.co/hu6HZfxInF

There’s a lot of buzz and overall excitement around Ogunjobi coming into the year, but so far in training camp in Latrobe the Steelers have brought the new addition along slowly in a cautious effort due to the foot injury.

Speaking with reporters Tuesday from the Fred Rogers Institute on the campus of Saint Vincent College, Steelers GM Omar Khan said that is by design with Ogunjobi as the Steelers are “trying to be smart” about the workload with Ogunjobi, especially with a lot of football left between now and the start of the season Sept. 11 on the road against the Cincinnati Bengals.

Ogunjobi is projected to have a big role in the Steelers’ front seven alongside the likes of Cameron Heyward, Tyson Alualu, T.J. Watt and Alex Highsmith in the trenches, so bringing him along slowly in his recovery from the foot injury and subsequent surgery is the right move for the Steelers, especially right now in training camp.

Ogunjobi has not worked in team. Healthy but team is being cautious off the injury.

Beyond that, no. Every other player has gotten reps.

Though he is missing some valuable time at the moment in training camp, especially with the pads coming on, to get acclimated with a new defense and new teammates, he’s a veteran overall and shouldn’t face that big of a learning curve adjusting to the black and gold.

Khan’s comments mirrored what Ogunjobi said upon his arrival in Latrobe, stating that his foot is “Okay.”

“My foot’s okay, but my biggest thing of going through my process was just that God doesn’t make mistakes,” Ogunjobi said, according to video shot by Jack Hillgrove of WTOV-9. “You know, so everything happens for a reason. You know, I went through my injury. I’ve been bouncing back. I’ve been recovering. I’ve been rehabbing day-by-day so I’m excited once again for the opportunity.”

Once he gets back on the field and really ramps up his workload, the Steelers will have a very stout front seven, at least on paper, which should help Pittsburgh get back to stopping the run at a high level in 2022, helping turn the vaunted Steelers’ defense back into one of the league’s best this season as the Steelers retool offensively.