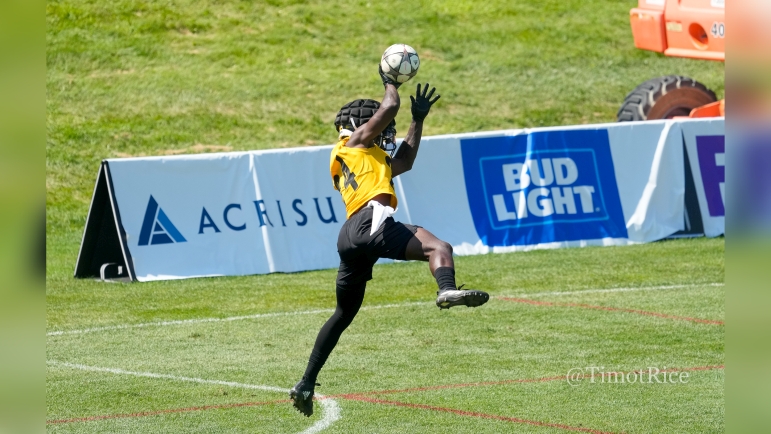 The supposed busiest stretch of Pittsburgh Steelers’ training camp came to a halt over the weekend. Rain cancelled practice Friday and it shifted the team to a closed Saturday session with Sunday being a regularly scheduled off day. Meaning, it’s been a couple of days since we’ve seen this team up close and personal. With that in mind, here’s a good reset on what to watch for Monday.

– Still everyone’s focus. Kenny Pickett has made serious progress from Week One to Week Two. If you want the exact context, here’s the comparison of his first four versus his second four set of practices.

There’s work to be done but we’re seeing serious jumps in completion percentage, a massive leap there, a YPA that more than doubled, and a YPC that shot up too. He’s also taken better care of the football and is passing the eye test. The numbers just back everything up.

So what’s next? Being consistent and remaining strong, of course. Not riding the up/down wave that can kill a quarterback. But on top of that, he still needs to be able to push the ball downfield. His YPA and YPC remains low and even some of his downfield completions, like a 26-yarder to Steven Sims, was an underthrown pass that Sims had to slow down for.

– I didn’t get the chance to watch Jaylen Warren bounce back from a tougher Thursday practice. We don’t know how he performed in the Saturday session so we’ll see how he looks today. Ball security will be the key for him after a drop and fumble in that last public practice. Not sure if there will be another round of backs on ‘backers since it didn’t happen Friday night. I don’t believe they did it Saturday but I’m not 100% sure.

– Of course, we’ll be checking in on Najee Harris’ status. He doesn’t seem poised to practice Monday, not in full anyway, but we’ll see if he ramps up any of his work.

– Anthony McFarland has had a solid summer and needs to keep that going. He can’t be a flash in the pan. His Pony work is giving him extra reps.

– Another group that’s returning closer to full. Chase Claypool could be all the way back while Diontae Johnson will continue working in team after earning his contract extension. If both are in team, we’ll see how the receiver lines look with two starters all the way back. Assuming George Pickens will be the #3 and likely on the outside as the Z with Johnson in the slot but we’ll see how it breaks down. Anthony Miller and Cody White have been fighting for reps with Miller having the stronger camp.

– Tyler Vaughns has caught my eye with a solid first two weeks. But we’ve seen plenty of receivers flash early and fade late: Rico Bussey Jr. and Damoun Patterson are two recent examples and most have forgotten their names by now. Vaughn’s gotta keep things going all the way to the end and through the tape. That’s what I’m focused on the most.

– Whose going to consistently step up? Group has had their moments: Jace Sternberger, Kevin Rader, Connor Heyward. But no one is really cementing themselves into that #3 spot. Let’s see if anyone can run away with this thing starting this week. Three different type of dudes. The versatile H-Back in Heyward, the veteran blocker in Rader, the in-between of Sternberger, though his blocking is a big question as a big “move” tight end coming out of Texas Tech.

– I’d also love to see a big week from Zach Gentry, especially vertically. His camp hasn’t been bad but it could be better. We’ll also check on Pat Freiermuth’s health. As of Saturday, he wasn’t in pads, but he’s close to a return. Hamstring injuries just take time to come all the way back from.

– It’s not like we have All-22 to comb through so I understand my evaluations can be more narrow but James Daniels didn’t seem to have a great week last week. But he’s new and could be trying to gain comfort too and facing some good players. But I want to see him win more often, especially in 1v1s. It’d make me at least feel a little better.

– Will Kendrick Green keep pushing Kevin Dotson? Dotson still has the advantage and I’m not sure what will change that. We may not learn more until the Steelers get inside a stadium. But that battle is ongoing.

– Really deep group here. We’re keeping an eye on Larry Ogunjobi who has yet to participate in team. Mid-way through camp, you have to think the Steelers will let him loose soon. He’s healthy enough to do it and should be running with the first-team once he’s out there full.

– I’m not sure who else to mention because I want to mention everyone. Can Carlos Davis find a way to work himself into the 53-man roster conversation? It seems tough but Davis may truly be one of those players who will get plucked off waivers. He’s going to have a strong preseason. Khalil Davis has similar athletic traits while Doug Costin has been active batting down passes. Can Donovan Jeter make a play or two?

– Will Tyson Alualu get off PUP? It’s been a couple weeks now. He’s progressing in the right direction. I don’t think he’ll be in team by the end of the week but I’d love to see him get involved in individual work by Wednesday or Thursday and officially come off PUP.

– Some quietly good battles here. Genard Avery and Derrek Tuszka have worked as the second-stringers but Delontae Scott has been excellent in camp while Tuzar Skipper looks strong. This is a competitive group.

– But no battles have been as fierce as the ones at inside linebacker. Ulysses Gilbert III and Mark Robinson have been the names who’ve popped the most for me but I’ve seen a little something from Buddy Johnson while Marcus Allen is the most proven on Sundays. He better hope his hamstring injury heals fast – unfortunately, it’s doubtful he returns to practice until next week. I’m really enjoying just watching this battle play out.

– Hopefully Levi Wallace returns in full so the Steelers’ top three corners are working together. Cam Sutton’s injury is minor and he should be good for tomorrow. Arthur Maulet isn’t going away quietly and picked up a ton of first-team slot reps with Wallace out, keeping Sutton on the outside.

– Rookie Chris Steele has ball skills but needs to improve his technique when he gets into trouble. Linden Stephens is trying to avoid being one of the team’s first-five cuts. If I had to rank players #1-#90, he’d be pretty close to the bottom.

– Interested to see how lines look with the group, presumably, healthier. Minkah Fitzpatrick should work in team sooner than later, though he may still be held out of the live tackling sessions. Karl Joseph could be back soon after missing the last several practices for personal reasons. What will Damontae Kazee’s role be if Fitzpatrick is back? He’ll run second-team FS but will he receive any slot work? Miles Killebrew is also on the mend and could be back within a week or so.

– Should see punting at some point this week. We’ll see if Pressley Harvin can show similar consistency as his first session. But I am looking for some more yardage. He may be punting in some less-than-ideal weather too which will be a good test for him. Cameron Nizialek is looking to avoid more shanks.