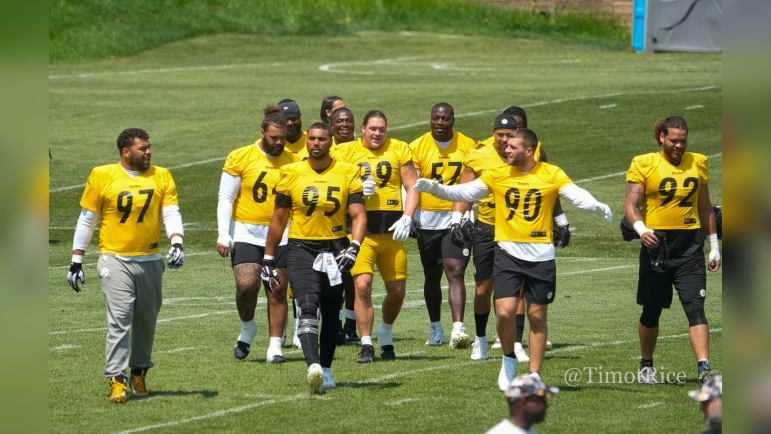 The 2021 season wasn’t a pretty one for the Pittsburgh Steelers by any stretch of the imagination. While some key individuals had incredible seasons (T.J. Watt, Cameron Heyward, Diontae Johnson, Najee Harris), the team overall struggled in all phases of the game, allowing the most rushing yards in the league, failing to create consistent turnovers, and really laboring to move the football offensively.

Still, Pittsburgh found a way more often than not, going 7-1-1 in one-score games, which saw quarterback Ben Roethlisberger lead a career-high six fourth-quarter comebacks and a career-high seven game-winning drives last season. Ahead of the 2022 season though, without Roethlisberger at the helm, some questions remaining about the run defense and a rebuilt offensive line still trying to find its game, ESPN analyst Bill Barnwell believes the Steelers will “most likely decline” in 2022.

In an article published Wednesday morning, Barnwell highlighted the Steelers as one of five teams, including the Green Bay Packers, Atlanta Falcons, Las Vegas Raiders and Tennessee Titans, who will most likely decline from their play in 2021.

Regarding the Steelers, Barnwell raised questions about the situation under center with quarterbacks that tend to hold onto the football longer than Roethlisberger did the last few seasons behind a woeful offensive line. Along with the questions about the quarterback situation, Barnwell also highlighted the offensive line as well as some concerns about young offensive weapons in Najee Harris and Chase Claypool, who he believes weren’t good enough in 2022.

That said, with the changes offensively, Barnwell does see a scenario in which the Steelers are better than he expects, especially offensively under second-year offensive coordinator Matt Canada.

“There’s certainly ways for them to exceed expectations in 2022. [Kenny] Pickett could win the starting job soon and look like he immediately belongs in the league, just as Mac Jones did with the Patriots a year ago,” Barnwell writes on ESPN.com. “Roethlisberger’s departure could spark a more creative offensive scheme from motion enthusiast Matt Canada. The Pittsburgh defense could force a bunch of takeaways after dropping from 38 in 2019 to 27 in 2020 and 22 a year ago.”

So far through training camp at Saint Vincent College in Latrobe and two preseason games against the Seattle Seahawks and Jacksonville Jaguars, the Steelers have looked a bit more creative and explosive offensively, including throwing the football into the middle of the field more consistently, utilizing an area of the field that was used much in the final years of the Roethlisberger era.

While the offensive line still remains a huge question mark, the playmakers at receiver and running back are a huge strength of this Steelers team overall, especially at receiver where the Steelers are at least three-deep once again with Claypool, Diontae Johnson and rookie George Pickens. Still, Barnwell is a bit lower on the Steelers than the consensus right now, highlighting the strength of schedule and the question marks on the roster as to why the Steelers are most likely to decline in his viewpoint.

“Facing what projects to be the league’s fourth-toughest schedule, though, it’s easier to see scenarios in which the Steelers take a step backward,” Barnwell writes for ESPN.com. “It took All-Pro-caliber seasons from their two best players on defense and a season-long tightrope walk against middling competition to keep alive their streak of .500 or better seasons. If Tomlin can stretch that to a 16th consecutive campaign, I’ll respect the legendary coach even more.”

The Steelers feel like a better team, top to bottom, than they were in 2021, at least on paper. With more talent, better fits within schemes on both sides of the football and a great coaching staff to boot, this team shouldn’t decline one bit, like Barnwell believes. Chances are, he’s writing an article a few months into the season stating how wrong he was about the black and gold.