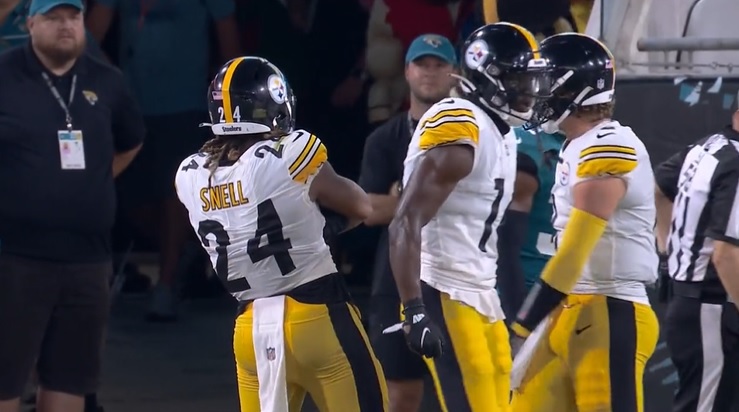 The Pittsburgh Steelers second preseason contest came against the Jacksonville Jaguars in Jacksonville, and despite a shaky offensive performance, the Steelers were able to hang on for a 16-15 win.

Pittsburgh opened the game with the ball, and facing third-and-six, QB Mitch Trubisky made a nice throw on a fade route to WR Chase Claypool for a gain of 29 yards. Facing pressure on second-and-13, Trubisky was able to use his legs and pick up 10 yards on a scramble. On third-and-three, Trubisky escaped a sack but his throw was initially ruled an interception by rookie LB Chad Muma, but the call was reversed and the Steelers brought out Chris Boswell for a 53-yard field goal. It hit the left upright and was no good, so the Jaguars took over at their own 43.

On third-and-five, QB Trevor Lawrence hit WR Christian Kirk for 13 yards and a first down, which would be the only one Jacksonville had in the drive. K Ryan Santoso came out for a 51-yard try and was no good, keeping the game scoreless at 0-0 with 9:36 left in the first quarter.

Pittsburgh went three-and-out, and EDGE Arden Key sacked Trubisky for a loss of eight on third down. P Pressley Harvin III booted a 41-yard punt that WR Laviska Shenault Jr. muffed and then recovered. Jacksonville’s second drive started on their own 29. On third-and-seven, Lawrence and Marvin Jones Jr. connected for a 16-yard catch-and-run. On the next play, T.J. Watt sacked Lawrence for a five-yard loss. On third-and-eight, Lawrence scrambled for 12 yards and a first down, and then RB Snoop Conner ran for ten yards on the next play to give Jacksonville a second-and-inches. A holding penalty cost the Jags ten yards, and the team settled for a Ryan Santoso 53-yard field goal which he hit. Jacksonville took a 3-0 lead with 2:16 left in the first quarter.

After a touchback, Pittsburgh started at their own 25. On second down, Trubisky and Diontae Johnson hooked up for a 16-yard gain, and Johnson looked to pick up another first down on the next play with an 11-yard reception, but he was called for offensive pass interference and Pittsburgh was facing a first-and-20. After a four-yard run and six-yard reception by RB Jaylen Warren, the first quarter would end with Pittsburgh looking at a third-and-ten.

A five-yard completion to Warren wouldn’t be enough for a first down, and Harvin III pinned Jacksonville deep in their own territory with a 47-yard punt that Shenault Jr. returned five yards to the Jacksonville 10-yard line. On second-and-seven, RB Travis Etienne ran for ten yards and a first down. Lawrence and Jones Jr. connected for another first down with a 14-yard gain on a reception, and another 10-yard reception by Jones Jr. later in the drive gave Jacksonville a new set of downs.

After a 12-yard first down by WR Zay Jones, the Jaguars had it on the Pittsburgh 35. A 22-yard gain to Kirk would put Jacksonville in the red zone, but they wouldn’t pick up another first down. A 25-yard field goal by Santoso would give Jacksonville a 6-0 lead with 6:06 left in the first half.

WR Gunner Olszewski returned the kickoff to Pittsburgh’s 28-yard line, and QB Kenny Pickett came in to replace Trubisky. His first pass was a six-yard completion to fellow rookie, WR George Pickens, but an illegal shift on second down cost Pittsburgh five yards.

A 19-yard reception by Claypool was taken off the board due to a holding penalty against OL James Daniels, and on third-and-18, the Steelers only managed a seven-yard gain. Jacksonville would open their next drive on their 30-yard line after a 42-yard punt by Harvin was returned for a loss of one.

Pittsburgh again couldn’t get off the field on third down, as Lawrence hit Kirk for an 11-yard gain on third-and-four. A 10-yard catch-and-run by Conner gave Jacksonville another first down, but the drive stalled out soon after the Pittsburgh 40. On fourth-and-six, the Jaguars went for it but were stopped after S Damontae Kazee made a nice stick on TE Evan Engram short of the sticks.

Pittsburgh got rolling immediately when Pickett hit Johnson for 18 yards on the first play of the drive, and then Pickett and TE Pat Freiermuth built some chemistry with back-to-back receptions for gains of 10 and then 24 yards, the second coming on a nice seam route by the second-year tight end. Offsetting penalties nullified an 11-yard touchdown pass by Pickett to Johnson, but on the very next play, Pickett found RB Benny Snell Jr. open out of the backfield for an 11-yard touchdown. Boswell’s extra point was good, and the Steelers took a 7-6 lead with 23 seconds left in the first half.

That would be the last score of the drive, and the two teams would go into the half with Pittsburgh leading 7-6.

C.J. Beathard replaced Trevor Lawrence at QB for the Jaguars in the second half, and Jacksonville went three-and-out on their opening drive. Mason Rudolph came in at QB for Pittsburgh, and his first drive would start at their own 16. Rudolph’s first pass was a six-yard completion to Olszewski, but his throw to Pickens on third-and-three would go for no gain and the Steelers were forced to punt. Harvin’s punt went 48 yards but WR Willie Johnson returned it for an 11-yard gain and Jacksonville took over at their 40-yard line.

Jacksonville went three-and-out again, but P Logan Cooke pinned Pittsburgh back at their own two-yard line. On second down, Rudolph threw the ball away in the end zone under pressure and was flagged for intentional grounding, which resulted in a safety. Jacksonville took an 8-7 lead and got the ball back.

A 76-yard safety punt by Harvin was returned to the Jacksonville 18, and an 11-yard first down run by RB Ryquell Armstead moved the Jaguars to their own 29. On third-and-six later in the drive, WR Tim Jones broke a tackle en route to a 17-yard gain and a first down. That would be the extent of Jacksonville’s success, as they punted a few plays later. Cooke’s punt went for a touchback, so the Steelers would start at their own 20-yard line.

A 10-yard completion on second down would be wiped due to an illegal formation against Pittsburgh, and on second-and-17, Rudolph found TE Zach Gentry for nine yards and the team would pick up a first after a 13-yard reception by Warren out of the backfield. On third-and-five, WR Steven Sims was stopped after a four-yard reception which brought up fourth-and-one. Olszewski fumbled on a fourth-and-one end-around, and Jacksonville recovered at their own 48.

Beathard found TE Dan Arnold for an 18-yard reception to the Pittsburgh 34. OLB Delontae Scott was flagged for roughing the passer on the next play, giving the Jaguars another 15 yards to the Pittsburgh 19. A third-down defensive holding against DB Tre Norwood gave the Jaguars another first down. On third-and-goal, Beathard scrambled for four yards and a touchdown. Santoso’s extra point was good, and Jacksonville took a 15-7 lead with 12:17 left in the game.

RB Anthony McFarland Jr had a 35-yard return on the ensuing kickoff so Pittsburgh would start in good field position at their 38. On third-and-five, after offsetting penalties, Miles Boykin gained nine yards and Pittsburgh got a new set of downs. Back-to-back completions to Tyler Snead and Tyler Vaughns helped pick up another first down at the Jacksonville 39. Another completion to Snead gained nine yards and a first down, which was followed by RB Max Borghi getting his first action with the team on a one-yard run. On third-and-nine, RB Mateao Durant only managed a three-yard gain, and K Nick Sciba came out and made a 38-yard field goal to cut the Jacksonville lead to 15-10 with 6:20 left to play.

On third-and-seven with a chance to get off the field, Pittsburgh’s defense allowed rookie quarterback E.J. Perry to go find Tim Jones for a first down, and Jones was able to shake a few tacklers and gained 51 yards. On third-and-five from the Pittsburgh 18, CB Justin Layne made a case to keep a roster spot for just a little bit longer with an interception that he returned 34 yards to the Pittsburgh 48. With 3:03 left, Pittsburgh would have a chance to take the lead.

Tyler Vaughns, who scored the game-winning touchdown last week, had back-to-back receptions of 25 and 21 yards, and the Steelers were in business at the Jacksonville six-yard line. On third-and-goal, Rudolph to went to Vaughns again, but he was stopped just short of the end zone. On fourth-and-goal following the two-minute warning, Rudolph threw it to Snead for a touchdown. They kept the offense on the field to go for two, but the pass to Connor Heyward was incomplete. Pittsburgh would hold onto a 16-15 lead with 1:56 left in the fourth.

After a kick return to the Jacksonville 23, Perry was sacked by DeMarvin Leal on first down, and an incompletion on second down set up a crucial third-and-12. Perry found WR Kevin Austin Jr. open for a 21-yard gain, and after a two-yard reception by Tim Jones, the Jaguars took a timeout with 57 seconds left. Austin Jr. had a bad drop on second-and-eight, and on third down Jacksonville gained 14 and picked up a first down. Facing a third-and-six from the Pittsburgh 38, they gained nothing on a completion to Jones. With three seconds left, Santoso came out for the game-winner, and the 57-yard attempt was no good. The Steelers hung on for a 16-15 win.

With the win, the Steelers advance to 2-0 in the preseason. They close out the preseason next Sunday when they host the Detroit Lions at 4:30 p.m.