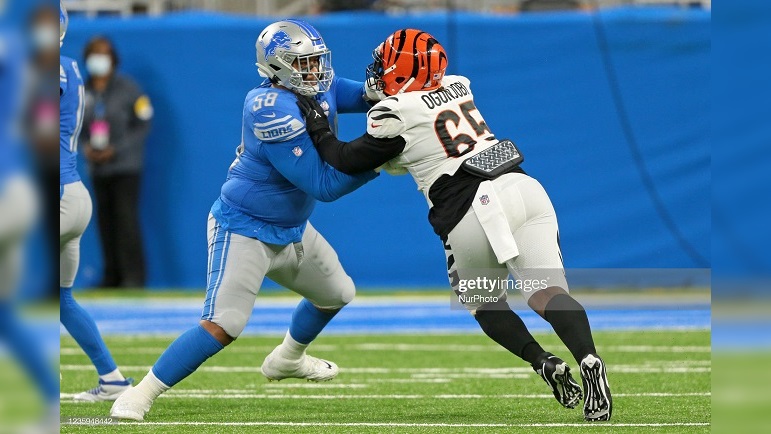 The Pittsburgh Steelers had a busy free agency, including the signing of defensive tackle Larry Ogunjobi, and today I wanted to provide some data context to what he provided last season as a pass rusher along with Pittsburgh’s defensive lineman as well. Let’s get right to it, starting with 2021 pass rush snaps and pass rush wins versus blocking from PFF to get a gauge of the position comparatively. 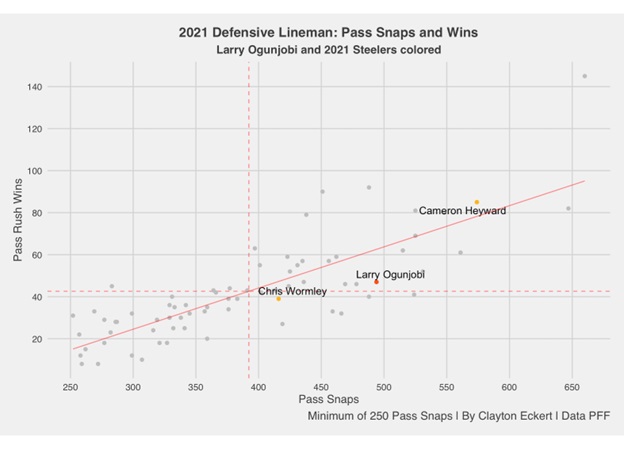 Ogunjobi was above the mean in both areas, with the 11th-most pass snaps (494) along with 47 wins, which tied for 21st. As many on our team at Steelers Depot have mentioned, his main opportunities will likely carry over this season as a pass rusher in the black and gold (barring injury), and it will be interesting to see what his snap counts and quality of play look like as the season progresses.

Now let’s look at hurries and total pressures to see how the players fared effecting the quarterback: 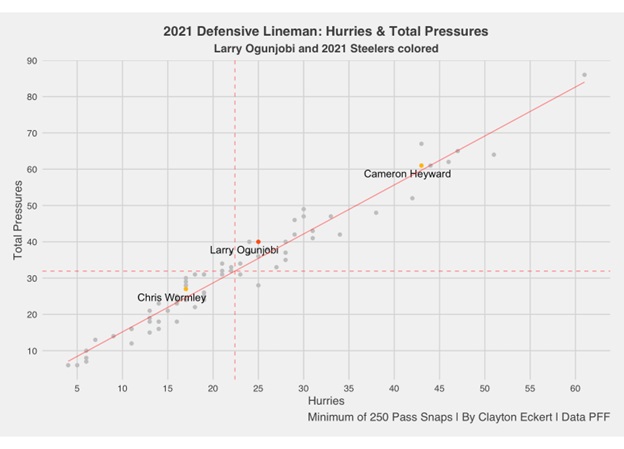 Heyward fared well as expected with 43 hurries and 61 total pressures, both tying for sixth in the NFL. Ogunjobi was above average again, landing between the 2021 Steelers. He provided 25 hurries (T-23rd) and 40 pressures (T-18th) as a Bengal, highlighting Dave Bryan’s point on if Pittsburgh gets that version of him, what a steal. Wormley lands below the NFL mean with 17 hurries (T-47th) and 27 total pressures for his better rank of the two (43rd). 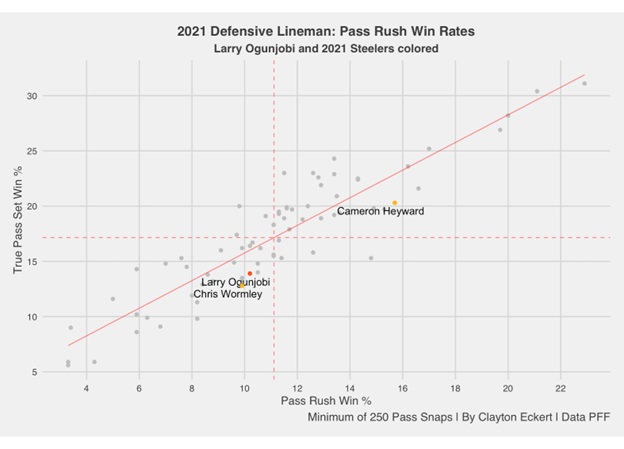 Next, I’d like to provide an interesting formula from PFF called Pass Rush Productivity (PRP), which is defined as the amount of pressure accumulated per pass rush snap, also giving weight towards sacks along with pass snaps. Here’s a similar view to the prior graph with the overall result along with true pass sets: 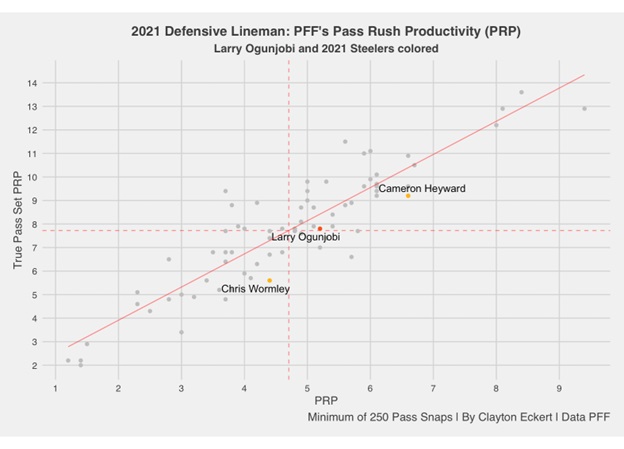 This view really adds value with the stronger weight of availability, opportunity, and of course the ultimate goal of sacking the quarterback. Heyward fares best out of the highlighted players again with a PRP of 6.6, which tied for sixth, and a true pass set result (9.2) that ranked a bit lower than I expected (T-21st) but was still well above average. Ogunjobi’s best result was in PRP as well, with a 5.2 result (T-27th), but was barely above the mean in true pass sets (7.8), which tied for 35th. Wormley’s PRP number of 4.4 tied for the 41st rank, and his 5.6 true pass set result was below average at 56th. Encouragingly, each of these players fared better in the rankings without removing low likelihood of success plays.

To close, here are PFF grades for the position groups in the same situations (overall/true pass sets): 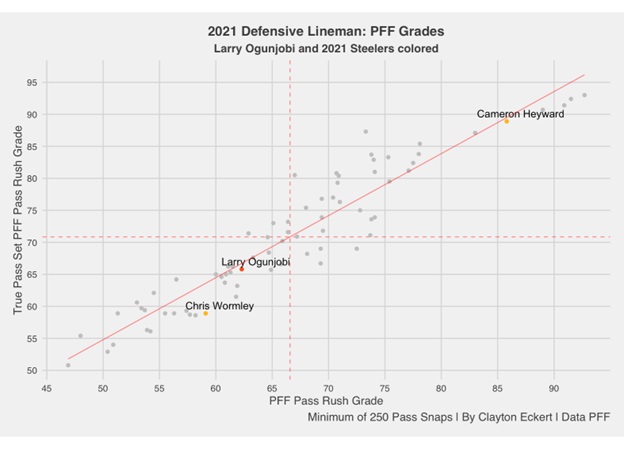 Regarding the data for 2021, Heyward was above the mean in all aspects of the data as expected. Ogunjobi was consistently the second-best player we were focused on today, and was above the mean in pass snaps, pass rush wins, hurries, pressures, and PRP. His below average results came when factoring his production in comparison to his total pass snaps, with pass rush win rates and grades being his lowest marks. Could he benefit if (knock on wood) this Steelers defensive stays healthy, providing a rotation and hopefully more quality over quantity? Wormley’s only above the mean result was in pass snaps, and here’s to hoping the point on Ogunjobi applies to him as well. One thing’s for sure, the 2022 Steelers sure need this defense to step up and it all starts up front.