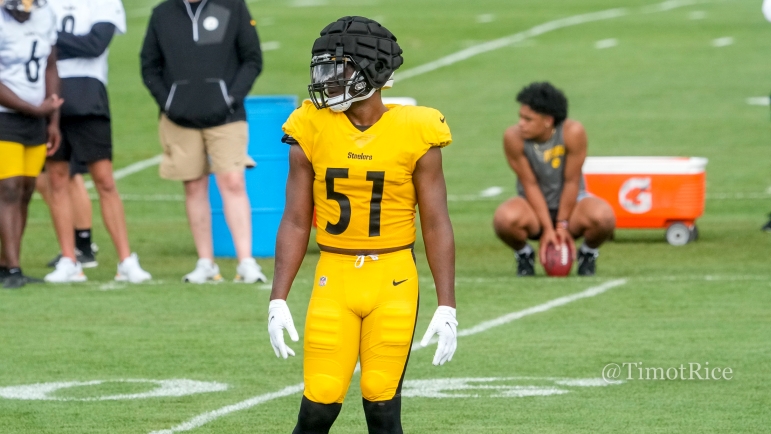 With the Pittsburgh Steelers’ 2022 training camp in the books, I wanted to put a bow on things with a quick winners/losers list. Those haven’t been something I like to do on a daily basis but after 15 public practices, we can draw some bigger conclusions.

Based on my view of training camp and the team’s preseason opener, here are the most notable winners and losers from the Steelers’ 2022 camp.

Kenny Pickett/QB – Pickett’s camp got off to a slow start and he was easily the worst quarterback during the first four practices. But this is a marathon, not s sprint, and Pickett quickly progressed the rest of the way. He finished camp with a 70% completion percentage, one of the best by a Steelers’ QB since we began tracking things in 2015, while taking better care of the football the rest of the way.

He sped his up his progressions and internal clock and displayed good accuracy and placement that evened out as camp went along. Pickett was composed and poised and had a near-perfect NFL debut, throwing the game-winning touchdown to Tyler Vaughns with three seconds left. Pickett’s taken command and is in the driver’s seat to be the team’s #2 quarterback to open the season. It’s his job to lose.

RB Jaylen Warren/RB – One of the camp darlings, Warren went from undrafted unknown to firmly in the mix for a roster spot. Short but not small, Warren is a thickly built and powerful runner who is hard to take down, breaking tackles and falling forward. He first shined in backs on ‘backers, showing fearlessness and success in that drill, the ability to anchor and handle bull rushes. He ran hard and angry and most overlooked, was a highly-conditioned and ready player. The Steelers’ RB room got hit by injuries and Warren was one of just two backs, Anthony McFarland the other, to be with the team all camp and not miss a single practice. He shouldered a heavy load in practice and in game while working on multiple special teams units in an attempt to build his value there. Ball security has been an issue and that’s an important one but Warren’s talent and ability are real.

Mason Cole/C – Gotta show the offensive line a little bit of love. The line still has its fair share of question marks but Cole may be the team’s rock in the middle. He had a solid summer and wasn’t up-and-down like basically every other lineman on the team. He snapped well, didn’t miss a practice, and has a strong anchor to handle head-up nose tackles. Cole looked like the team’s best lineman in their opener against Seattle. Pittsburgh should have much more stability there than what they had last year.

George Pickens/WR – If I was ranking this list, Pickens would be #1. No Steeler made as many “wow” plays as Pickens this summer. It happened so much it became routine and almost a question if he didn’t record a sensational catch during practice. He turns 50/50 jump balls into 70/30 odds in his favor with great tracking, leaping, and a solid pair of hands who snags passes away from his body. He’s an aggressive blocker and fluid runner who seemingly glides downfield. He dominated the camp stat sheet, leading in targets, yards, and touchdowns. He still has work to do as a route runner and with his release packages but he has all the talent in the world. He’ll be the #3 receiver in 11 personnel this season, playing on the outside, most often the Z receiver, while Chase Claypool moves to the slot.

Gunner Olszewski/WR – Olszewski didn’t often wow but was steady throughout this whole process and finished camp on a high note, Kenny Pickett’s favorite target over the final four practices. His route tree success was limited to sitting down against zone coverage and running over routes against man but he caught the ball well, showcased his versatility with inside/outside work plus return game credentials, with a solid preseason outing. Mike Tomlin praised his toughness. Calvin Austin’s foot injury is unfortunate but may open the door to Olszewski seeing 10-15 rotational snaps to start the season.

Frisman Jackson/WRs Coach – Not often I put coaches on here but Jackson is deserving. He’s coached up a young and in many ways, unproven or questioned group. Pickens and Austin, the rookie wideouts. Claypool coming off a disappointing season. Miles Boykin as he starts over with a new team. Olszewski, a man with just a handful of career receptions. Jackson has coached these guys hard and put an important emphasis on receiver blocking, drilling it more than previous coaches. He’s vocal, energetic, and knows when to come down hard and when to praise. Reminds me a lot of what TEs Coach Alfredo Roberts did for his young group in 2021.

Robert Spillane/ILB – Always around the ball. In one sentence, that’s how I’d describe Spillane’s summer. He was active in the run and pass game from battling Benny Snell in 1v1 coverage drills to dominating some of the run sessions. He lacks any semblance of long speed but diagnoses quickly and takes good angles to the ball while roaming underneath and tying the team lead with two interceptions. He outplayed Devin Bush and has done all he could to push him for a starting spot. It’s certainly possible Spillane carves out a defensive role sooner than later.

Myles Jack/ILB – Jack is Steady Eddie. Same dude day in and day out. And that’s a good thing. He was solid in coverage and should be this team’s best coverage linebacker since Ryan Shazier. Jack’s also active in the run game and consistently gets off blocks. He’s well-rounded and should be the team’s every down linebacker this season. A very good camp.

Tre Norwood/S – A solid second summer for Norwood, poised to be the team’s 6th DB and dimebacker. Norwood is solid in man coverage and should see the field in obvious passing situations situations. He takes good angles to the ball and knows how to finish. He played well in the opener, not allowing a completion on four targets. His run defense and physicality have also improved and he’s a more forceful tackler compared to a year ago. His overall profile and arc is very similar to Cam Sutton. Norwood offers slot/free safety versatility.

Pressley Harvin/P – Gotta put Harvin on here who looks far more consistent than a summer ago while booming the heck out of the ball. Perhaps the release of other punter Cameron Nizialek cleared Harvin’s mind because he put in some excellent performances in the practices after the initial wave of cutdowns. Pittsburgh showed faith in Harvin, not even having him punt in the opener, while releasing Nizialek to trim their roster to 85. Harvin will be the Week One punter and is poised to improve upon his difficult, disappointing rookie year.

James Daniels/OG – Perhaps the biggest disappointment this summer, Daniels was the guy I wanted the Steelers to sign this offseason. So far, Daniels hasn’t looked like the guy he was in Chicago last year, struggling in pass pro, routinely losing 1v1 battles against Chris Wormley, and not looking like the plus athlete he was billed to be. It’s early and he’s adjusting to a new team, coaching staff, all that jazz, but it was a tough couple of weeks. Hopefully that changes going forward.

Mason Rudolph/QB – Rudolph’s on here not because he played poorly. In fact, he was still arguably the best QB overall this camp. But not only will he not be this team’s starter Week One, it’s doubtful he’ll even dress. Mitch Trubisky will start with Kenny Pickett in control of the #2 spot. After biding his time and waiting for Ben Roethlisberger to retire and finally having the chance to start, he’s somehow gone backwards and fell down a rung on the depth chart. Football’s a business but that has to be frustrating. At this point, Rudolph would probably rather be playing elsewhere.

Chris Oladokun/QB – I won’t dwell on his lack of reps too much and at least he got something, 19 reps over the final two practices. But Oladokun got few chances to show what he could do and he simply hasn’t even received enough reps to be deemed ready to play inside a stadium. Perhaps he can see a couple of drives in the finale. When Oladokun did play, his accuracy was erratic and he completed less than half his throws.

Mataeo Durant/RB – Don’t want to be too hard on undrafted rookies who didn’t have great odds to begin with but Durant certainly had sleeper buzz and with a good summer, an opportunity to push for a roster spot. That hasn’t happened. Durant did show a burst of speed to the corner but like his Duke tape, struggled with power and was often swallowed up when running between the tackles. He didn’t catch the ball as often or as well as I thought he might and his pass protection, understandably, was lackluster, including allowing a sack in the preseason opener. Injuries to Jeremy McNichols and Master Teague is the main reason why he still has a practice squad spot.

Justin Layne/CB – Layne is someone who went from on the bubble, potentially just inside of it, to very much on the outside. He finished camp as a third-string corner fighting for snaps, at times splitting reps with the likes of Chris Steele and Linden Stephens. Layne made some plays early in camp but James Pierre was stronger throughout. Layne’s chances of making the 53 have faded.

Levi Wallace/CB – Wallace’s play didn’t seem terrible but it was a bit of a turbulent camp for him. Wallace missed a fair amount of time early on due to an unexplained illness, not seeing consistent playing time until about mid-way through training camp. After beginning the summer rotating with Ahkello Witherspoon, Wallace ran as a clear #2 the back-half of camp. He did work with the 1’s in dime packages and late in camp with the nickel defense when Arthur Maulet pulled his hamstring. One iffy camp shouldn’t hurt Wallace too much but I was hoping to learn more from him this summer.