The Pittsburgh Steelers will wrap up their 2022 preseason schedule Sunday at Acrisure Stadium against the Detroit Lions, and ahead of that contest, it’s now time to pass along a salary cap update with the end of the Rule of 51 near.

Currently, the NFLPA has the Steelers at $9,403,376 under the cap and with 91 players still under contract. Their reporting is behind, however, as the team has now cut their roster to 80 active players, with three others still on the Reserve/Injured list. While a few new contracts have yet to hit the NFLPA site, my estimation of those deals results in the Steelers currently being $9,543,376 under the cap when it comes to their Rule of 51 number.

That estimated Rule of 51 number that I am working with does not account for the three players still on the Reserve/Injured list on split salaries. These three players are wide receiver Anthony Miller, safety Karl Joseph and running back Jeremy McNichols. That total amount is $1.44 million.

The Steelers will still need to budget for a 16-man practice squad as well as a 52nd and 53rd player on their roster once the Rule of 51 ends. The total estimated amount of those combined forthcoming charges is roughly $5,143,200. Additionally, I have the Steelers budgeted as wanting to carry $8 million in free cap space to start Week 1, and that might be too conservative a number based on the last two seasons. That slush fund, if you will, is for weekly in-season practice squad elevations and emergency players signings.

Taking into account the team’s forthcoming budgeted charges, in addition to the three players still on the Reserve/Injured list, I have the Steelers projected useable cap space in the negative at -$5,039,824. Remember, that’s the projected post Rule of 51 number that includes forthcoming projected costs, as in real-time the team still has $9,543,376 to work with. Don’t confuse the two amounts.

The Steelers obviously can free up some smaller amounts of salary cap space after roster displacement via the final roster cutdowns, especially if players such as wide receiver Miles Boykin and/or inside linebacker Marcus Allen are jettisoned, as each carries a cap charge of $2.54 million. However, as we sit here today, it seems like a good bet that those two players have very good chances at being retained. In short, the final roster cutdown isn’t likely to produce much cap space as the lowest Rule of 51 cap charge is currently $895,000.

Will the Steelers need to restructure the contract of outside linebacker T.J. Watt in the next two weeks? There’s a very good chance we could see that happen, and it might mostly depend on what amount the team chooses to carry as a free cap space buffer to start the season. It might also depend on if Rudolph is traded and if there are any surprise cuts in top 25 highest earners currently under contract. As we sit here today, it’s a good bet that Watt will need his contract restructured to some degree.

Obviously, the Steelers will be able to rollover any unused 2022 salary cap space to 2023, so it shouldn’t be considered a big deal should they wind up restructuring the contract of Watt between now and Week 1. The team has yet to restructure any contracts this offseason, and that’s a rarity for the team when it comes to recent history. 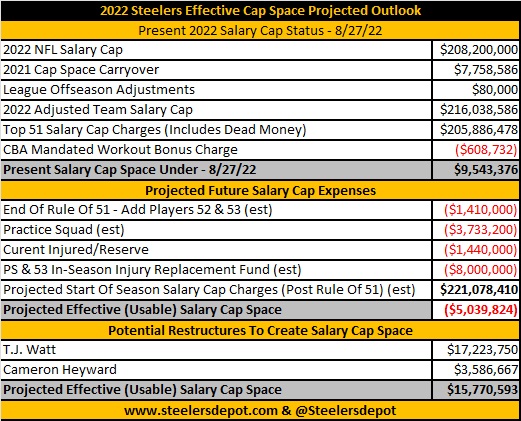