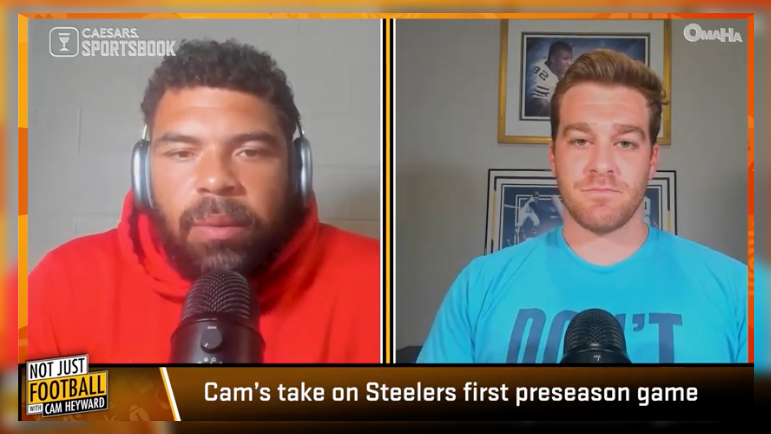 After much of the attention and offseason discussions were centered on the run defense issues in 2021, the Pittsburgh Steelers made it a point of emphasis to get back to their run-stopping ways in a hurry in 2022.

Throughout much of training camp the rebuilt Steelers defensive line looked rather strong against the run, but the big test would come in the preseason opener at Acrisure Stadium against the Seattle Seahawks. Needless to say, the Steelers weren’t quite prepared for the test and turned in a resounding dud in the run defense department, allowing 159 yards and one touchdown on 26 carries against Seattle.

While many of the key front seven players like Cameron Heyward, Tyson Alualu, Larry Ogunjobi, T.J. Watt and Alex Highsmith didn’t play in the game, the inability to consistently stop the run was a problem for the Steelers that drew the ire of head coach Mike Tomlin after the game and later the following week in practice at Saint Vincent College in Latrobe.

For many outside observes, the run defense issues Saturday night at Acrisure Stadium could be chalked up to who wasn’t out there. Tomlin certainly didn’t use that as an excuse, stating to the media that the players on the field didn’t uphold the standard defensively. On Thursday, in his latest podcast, “Not Just Football w/ Cam Heyward,“ the Steelers’ star defensive lineman added to that belief, telling co-host Hayden Walsh that it’s about the execution of the players on the field within the scheme, rather than who is or is not out there.

“I think when you look at it, it’s not about the players that are in, it’s about the execution. It’s about understanding who needs to be in this gap,” Heyward said to Walsh, according to video via ESPN’s NFL YouTube page. “In every defense, we have someone in that gap for a reason. It’s about guys standing in those gaps. If it’s a double, making sure that if two guys are on you that our insiders linebackers are shooting or the corners filling.

“Run defense is an 11-man game. Anyone who tells you that it is just about the line or the front seven, they are…very mistaken,” Heyward added. “You have to make sure run defense is 11 man group, make sure everybody’s flying to the ball, and if one guy misses, ten guys gotta be there. If you get one on one blocking, you gotta make sure you get off blocks. Hopefully we clean that up in the next one. We’ve really been harping on run defense. Camp…that’s been the main thing. We want to get after the quarterback. Yes, so be it. But to get after the quarterback, you gotta stop the running back and the running game.”

That showed up time and time again in 2021 for the Steelers due to a depleted defensive line that was decimated by injuries, and an inside linebacker room that couldn’t get off blocks and saw its confidence dwindle week after week.

Ahead of the 2022 season, the Steelers welcome back Tyson Alualu, who missed all but six quarters last season, and added Larry Ogunjobi and rookie DeMarvin Leal in free agency and the 2022 NFL Draft to help strengthen a defensive line that sees a handful of other experienced players return for another season with the black and gold.

Behind the defensive line, the Steelers also brought in Myles Jack at linebacker, and added strong run defenders in Levi Wallace and Damontae Kazee to the secondary to try and help fix some of the run game issues the Steelers experienced in 2021. It’s certainly been a point of emphasis throughout training camp, but it’s about time the Steelers started to show a bit of a return on that attention paid to the one area of the game, and fast.