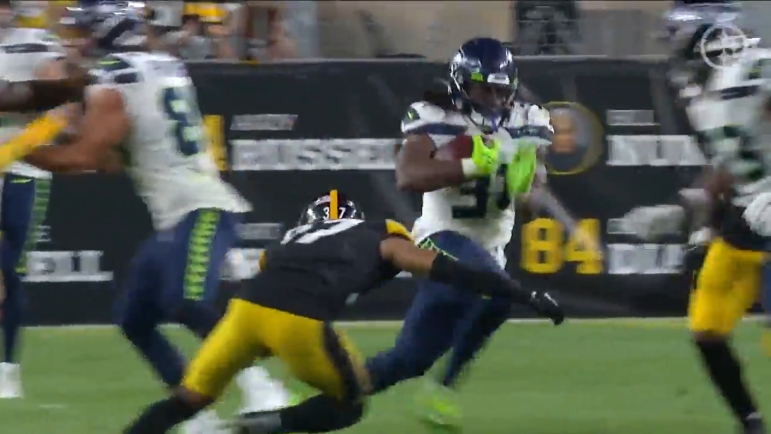 More than anything else coming out of the 2021 season, the Pittsburgh Steelers knew that one thing they had to fix was their run defense. They finished last in the league, not just based on the stats, but off of watching the tape. Saturday night’s preseason debut wasn’t necessarily the salve it could have been.

Hosting the Seattle Seahawks at Acrisure Stadium, over four quarters, the defense allowed 159 yards on the ground on 26 touches with one touchdown, averaging 6.1 yards per carry, in spite of the fact that they did not allow an explosive play. DeeJay Dallas and Travis Homer both ran well against a defensive front that was admittedly missing some key components.

After all, the entire defensive front did not play. Cameron Heyward, T.J. Watt, and Alex Highsmith were all rested, while Tyson Alualu and Larry Ogunjobi were both held out as well as they work their way up to full 100 percent participation coming off of injuries.

But it doesn’t matter. Not to head coach Mike Tomlin. He was asked if the defense would get some kind of asterisk for its performance on the night given the numerous key players who were not in the lineup, his response was an emphatic no. “The standard is the standard, and we were below the line”, he said, via transcript provided by the team’s media department. “We’ve got to get better there”.

The Steelers allowed 2,483 rushing yards during the 2021 season, at a full five yards per carry, both marks representing the bottom of the barrel in the NFL that year. They also allowed 17 rushing touchdowns, an average of one per game, which ranked right near the bottom third of the league.

They allowed as many teams to rush for over 200 yards against them than opponents they held under 100 yards, remarkably enough, and only one game was below 93 yards, that being the 52 yards the Las Vegas Raiders managed in Week 2—a loss for Pittsburgh—without Josh Jacobs.

Of course, they didn’t have Stephon Tuitt last year even though they expected to, and Alualu was injured in Week 2. This year, Alualu is going to be back—provided that he is healthy—and while Tuitt is now retired, they were able to replace him with his cap savings by signing Ogunjobi.

They also used a third-round draft pick to bring in DeMarvin Leal, who is having a good camp and flashed as a pass rusher in the preseason with his ability to win at the line of scrimmage. But the run defense collectively was still notably under par.

And that does have to do with a lot more than just the defensive front, make no mistake. The secondary and inside linebackers share the blame as well, and Devin Bush, to be quite honest, didn’t look like he was going to be a different player this year. Some scoffed at the idea that the team might actually put Robert Spillane in the starting lineup, but it’s not so far from reality.