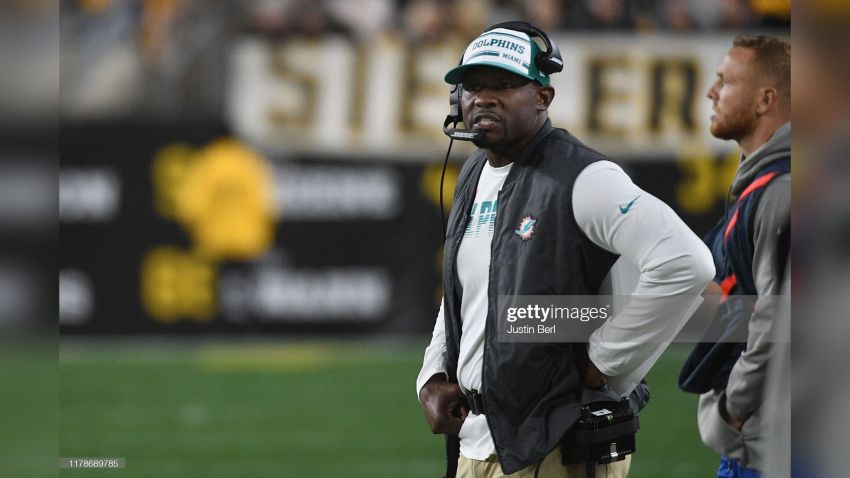 Shortly after being fired by the Miami Dolphins despite having a winning record as the head coach over three seasons in South Florida, current Pittsburgh Steelers senior defensive assistant and LB coach Brian Flores rocked the NFL landscape with claims of a $100,000 payment for each loss from Dolphins’ owner Stephen Ross in an effort to tank.

Though the NFL investigated and did not find evidence to support Brian Flores’ tanking allegation or that owner Stephen Ross was serious about paying $100,000 per loss, the NFL did strip the Dolphins of a first-round pick in 2023 and a third-round pick in 2024, while also suspending Ross through October 17, 2022 and fining him $1.5 million after a league investigation that showed the Dolphins tampered with the likes of Tom Brady and Sean Payton through “impermissible contact,” according to a report from ESPN’s Adam Schefter.

Here is the notice and penalties the NFL is imposing on the Dolphins for Integrity-Of-The-Game Violations: pic.twitter.com/Qk8KNaALyN

In the six-month investigation regarding the Dolphins and Flores’ claims, the NFL discovered that the Dolphins had “impermissible communications with quarterback Tom Brady in 2019-20, while he was under contract to the New England Patriots. Those communications began as early as August 2019 and continued throughout the 2019 season and postseason,” according to the findings announced by the league Tuesday.

In the ruling, the NFL stated that the impermissible communications with Brady and his agent during and after the 2021 season was while he was under contract with the Tampa Bay Buccaneers, as well as in the 2019 and 2020 seasons while he was under contract with the New England Patriots. According to the NFL’s findings, those discussions focused on Brady becoming a limited partner in the Dolphins.

Aside from the tampering contact with Brady, the Dolphins had impermissible communications with Don Yee, the agent for former Saints head coach Sean Payton, about having Payton become Miami’s next head coach. According to the NFL’s ruling, Miami did not seek consent from New Orleans to have those discussions, which occurred prior to Payton announcing his retirement from his post in New Orleans.

The NFL did not find evidence to support Brian Flores’ tanking allegation or that owner Stephen Ross was serious about paying $100,000 per loss.

Though the league found evidence of tampering with the Dolphins, the league did not find any evidence of the tanking incentives Flores claimed, and added that the $100,000 per loss incentive from Ross alleged by Flores was found to not be a serious statement.