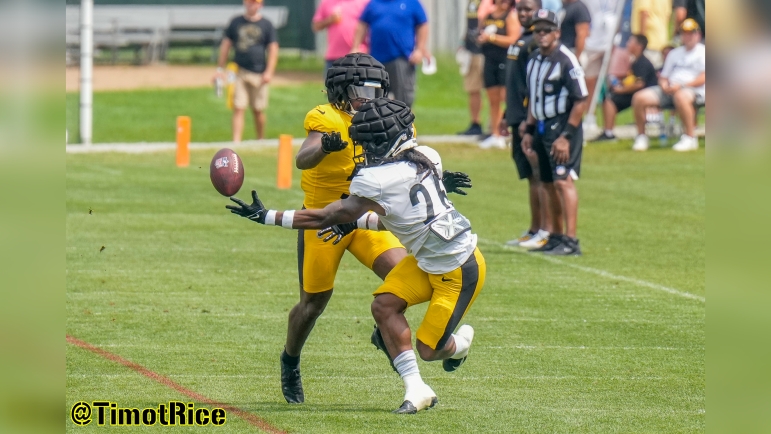 The running back battle isn’t over. Far from it. But the focus this year has been on the rookies, especially Jaylen Warren. Rightfully so, he’s had his moments, while fellow UDFA Mataeo Durant flashed Monday, earning plenty of Twitter buzz. But the Pittsburgh Steelers’ third running back to make the 53 might someone who’s been easily discounted throughout the offseason. Anthony McFarland.

It was easy to be pessimistic about McFarland’s chances heading into the summer. His first two years ranged from uneventful to unavailable. Hurt late last summer, he missed the first half of the season and never caught the moving train, one running full speed ahead with Najee Harris as its conductor.

McFarland entered this camp on the bubble. He’s still there. But his practices have inched him closer to the inside than the outside, even knowing the competition behind him. McFarland has been consistently good. As a more veteran player, he hasn’t ridden the ups and downs of rookies like Warren and Durant. Matt Canada running his version of the Steelers’ offense, no half-compromise with Ben Roethlisberger that always ended in #7’s favor, has always been a benefit for McFarland. Similar to last year but even more often, McFarland is being used in Pony – two-RB – groupings, giving him extra reps others don’t receive. He’s the only back to be aligned as a wing or in the slot in those sets and is used on jet runs and boots to the flat, getting him up to speed and trying to gain the edge.

He’s impressed as a receiver, making tough grabs in 1v1 coverage drills, sessions slanted to the offense but moments where McFarland is winning 50/50 opportunities. He did so yesterday on an angle route that crossed Myles Jack’s face and boxed him out as Jack took him to the ground. The above photo was a great sliding grab he made on a wheel route versus Devin Bush last week.

McFarland’s camp numbers have also been strong. Over the first eight public practices, he registered a 3.9 YPC, a better-than-you’d-think number for a camp setting, and the top mark on the team. It bests Benny Snell (2.7), Jaylen Warren (3.5) and Mataeo Durant (2.8) heading into Monday. Even McFarland’s runs are consistently good. During one stretch during last week, I had McFarland for consecutive runs of: 6, 5, 6, 4, 5, 4, 5, and 5 with a ten-yard run to end Thursday. Not getting that from the other runners.

No one’s won this battle yet. There’s still another half-dozen practices left of training camp, not to mention three preseason games. McFarland will have to show the ability to win between the tackles, not just along the edge, and of course, he’s gotta stay heathy throughout the rest of this process. Warren and Durant aren’t allowing McFarland to waltz into that spot. But I like how McFarland has positioned himself. He hasn’t grabbed headlines like the other backs have but his consistent practices could cement his spot on the roster while Warren and Durant fight for the practice squad.