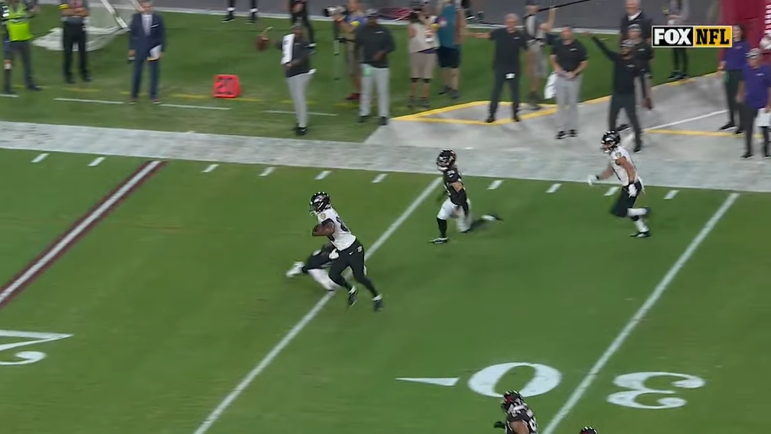 The Baltimore Ravens don’t always draft well at the tight end position—but they get it right often enough that when one of them shows promise, you should probably take notice. The latest tight end who is making a splash is rookie fourth-round draft pick Isaiah Likely, who appears poised to play a role as a receiving threat.

In just one half’s worth of work, the rookie caught eight passes in the team’s second preseason game for 100 yards and a touchdown. And he looked good doing it. While not big by positional standards, he is still 6’4” and over 240 pounds, but he is more of a receiver than a lineman, let’s put it that way.

“Everybody wants to be able to catch the ball, but it’s really what you can do after the catch”, he told reporters after Sunday’s game, via the team’s website. “That’s something I’ve preached whether it’s in game or even in practice. Having that in-game feel so that when I get in-game, that’s not the first time I’ve ever done it”.

According to Pro Football Focus, Likely gained 54 yards after the catch on his eight receptions, averaging 6.8 yards per reception after the catch. He also forced four missed tackles, after forcing three a week earlier on four receptions for 44 yards. Of his 12 receptions in two preseason games, four have been defined as contested catch opportunities—all four contested catch opportunities he has seen. Indeed, he has caught every pass thrown his way so far.

The Ravens, of course, already have an All-Pro tight end on their roster in Mark Andrews, or quarterback Lamar Jackson’s best friend, who caught 107 passes for 1361 yards and nine touchdowns in 2021. Those numbers are better than what Diontae Johnson produced for the Pittsburgh Steelers last year.

In his four-year career, Andrews has amassed 263 receptions for 3,466 yards and 29 touchdowns, very impressive and commendable numbers. He has consistently been the team’s number one or number two target during that time.

Of course, that is largely because the Ravens have struggled to put and keep together a coherent wide receiver room, and after having waived Miles Boykin and traded Marquise Brown and having failed to draft any, that isn’t likely (get it) to change in 2022.

Rashod Bateman, last year’s first-round draft pick, will be expected to be their number one receiver, but Andrews and now perhaps Likely will play central roles in the passing game. Devin Duvernay, Tylan Wallace, and James Proche are expected to round out their top four at the receiver position, so there is clearly room for tight ends to contribute as pass catchers.