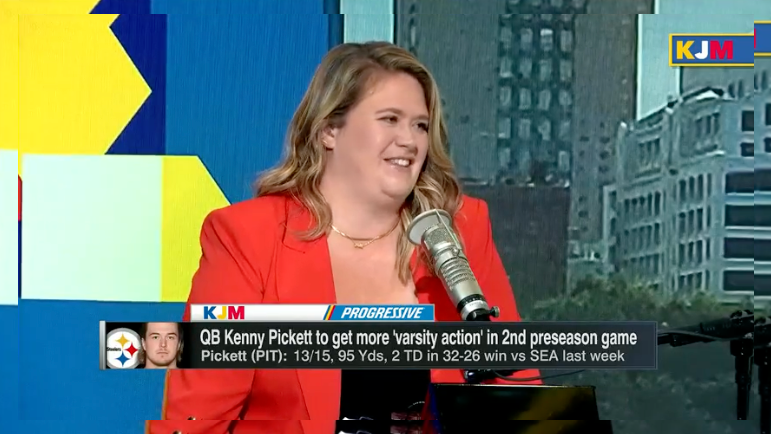 Though the hype train continues to gather steam racing down the tracks for Pittsburgh Steelers rookie quarterback Kenny Pickett, the former Pitt star and current darling of the quarterback room in the Steel City doesn’t have much of a shot — at all — of starting Week 1 against the Cincinnati Bengals on the road.

For much of training camp that’s been the talking point regarding the three-way quarterback competition in Pittsburgh featuring Mitch Trubisky, Mason Rudolph and Pickett. On Wednesday, NFL on Fox insider Jay Glazer said that it’s Trubisky’s team in 2022 to the surprise of nobody. On Friday, ESPN’s Brooke Pryor doubled down on that, stating that Pickett needs “an out of body experience” to win the job, whatever that means on the football field.

Appearing on ESPN’s KJM radio show with Keyshawn Johnson, Jay Williams and Max Kellerman, Pryor stated that the hype with Pickett needs to slow down, and that he’s not going to start the season for the Steelers under center, which — again — isn’t a surprise.

“Let’s be realistic here: he’s not starting Week 1,” Pryor said, according to video via ESPN YouTube page. “He would have to have an out of body experience, and Mitch Trubisky would also have to have an out of body experience in the opposite direction…for that to happen Look, Kenny Pickett has looked better than he looked in the first, you know, rookie mini camp early in camp, all of that…but he’s not gonna start Week One, even though it’d be a great Yinzer fairytale, it’s not happening.”

Pickett has looked much better as of late, had a sparkling debut in the preseason against the Seattle Seahawks, and is very clearly the intended future franchise quarterback for the black and gold.

It’s just not happening right away though, and that’s okay. Quite honestly, it’s okay if he doesn’t play a snap in 2022 and sits behind the likes of Mitch Trubisky and Mason Rudolph the whole season. That was the plan for Ben Roethlisberger nearly two decades ago, and there was nothing wrong with that then. That’s how the Steelers like to operate.

What a debut for Kenny Pickett.

However, Pickett’s play — as well as Trubisky and Rudolph’s, for that matter — will determine when (or if) he gets onto the field this season as the starting quarterback for the Pittsburgh Steelers. Even with another strong showing against the Jacksonville Jaguars Saturday on the road, Pickett isn’t going to make a push for the starting job.

It’s Trubisky’s job — for now — and it’s been that way since he was signed, even if the Steelers talked about a quarterback competition all offseason. He’ll get every opportunity to take the job and run once the regular season rolls around. How long he sticks there will be based on his play, his health, and the play of the team around him.

Just stop expecting or hoping Pickett is the man Week 1.