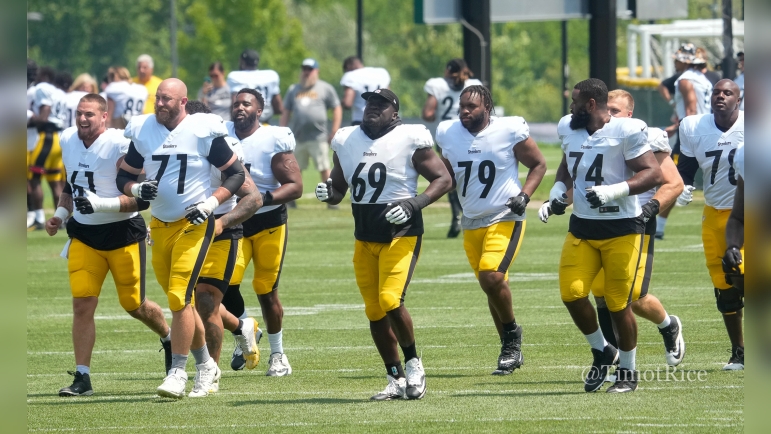 During an appearance on 93.7 The Fan today, former NFL offensive lineman and current analyst, Brian Baldinger talked about the Pittsburgh offensive line.

“Well, it has to get better. I don’t know how much better. I mean, they started two rookies last year with a quarterback that couldn’t move. That’s not a good formula to win games in this league when you gotta throw it,” Baldinger said. “The good thing is they’re getting live reps out there when they put the pads on, they thump. And so if you’re going up against Cam Heyward and T.J. and the guys up front, you almost have to get better. You almost have to. So just the fact that they’re out there right now and they’re going through this, I believe training camp is gonna make these guys better.”

The Pittsburgh offensive line needs to improve. It didn’t look great Saturday, and we all know it wasn’t good last year. If the Steelers are going to compete this year, the line absolutely needs to be better. It’s not as if the team didn’t take steps to address it, as they brought in Mason Cole and James Daniels, both of who will start this year. Daniels in particular looked a little bit shaky on Saturday, which is a little bit worrisome given that he was expected to be one of the anchors of this line. It’s only one preseason game, but Daniels needs to play better, as does the line as a whole.

A lot of that will come with cohesion. This group has only played one real game together, so the hope would be the next two games help them build cohesion and chemistry, and as a whole, they play better than they did. Baldinger’s point of them working against arguably the best front seven in the NFL has to make them better is a good one, but the line has to start showing some legitimate improvement sooner rather than later.

Baldinger did offer praise for both Dan Moore Jr. and Chukwuma Okorafor, as he said he thinks both are going to be good players. Okorafor needs to show that he can be an above-average tackle this year, as he just got a new contract this offseason. Moore needs to show improvement over last season, a year where he started off poor and got better throughout the year. If Moore can be at least average this year, that will be an upgrade over where he was last year.

If the Steelers get solid play out of their line, the chances of them having a good season increase exponentially. If the line struggles the way it did last year, the team could be looking at their first losing season since 2003.