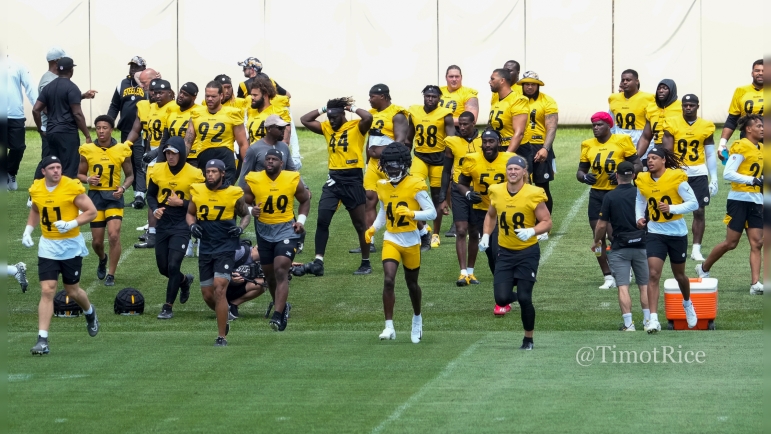 The Pittsburgh Steelers won’t be releasing an offiical depth chart until the start of the regular season. Not that those things done by the team matter that much anyway but we’ll be waiting until it’s a 53-man group to see how the team stacks things.

To hopefully offer a visual aid as to how things look after the first four days of practice, here’s an outline of how the Steelers’ depth chart looks. Rotations are common and the Steelers are arguably doing more of that than ever before so very few players here are set in stone and don’t move around. But this should help give you a better initial feel of how the lines look across the roster.

I will only be including players actually taking the field. So you will not see the likes of Tyson Alualu, Minkah Fitzpatrick, Diontae Johnson, and Larry Ogunjobi, none of which have worked in team sessions. Alualu and Fitzpatrick’s places in the pecking order are pretty clear while Ogunjobi seems poised to run at least first-team nickel when he returns in full. But we’ll wait to see it before we assume it.

Pretty clear pecking order here though reps have been distributed almost evenly between the top three. Oladokun has yet to get a single rep.

Running back rotations aren’t always black-and-white but this is roughly how it looks. McFarland a lot of 2 RB/Pony sets to see extra time even if it’s not in the backfield. Warren has run ahead of Durant but both have seen about the same number of carries. Derek Watt is the lone, true fullback.

The group beyond Gentry gets a little fuzzy especially with the 12/22 personnel in run-sessions. It’s been a pretty solid spilt between Rader, Heyward, and Sternberger.

Again, group looks a little different without Diontae Johnson being included. If he was practicing in full, someone like Vaughns wouldn’t be listed as high. And there’s more mixing/matching at this position than any other. So Anthony Miller has played slot and Z for example while Olszewski and Boykin have moved around. Claypool has seen a lot of time in the slot and Pickens worked there a bit Saturday with Claypool out. White got initial reps over Miller but that changed a bit Saturday.

Sims may be thought of as a slot guy but I’ve seen him play more on the outside.

More rotation later in the week with Dixon playing RG and Owens seeing work at center. Green has played guard and tackle and Tucker has seen some guard reps. Dotson and Green are in a true co-battle so I’m not picking a starter there. They’ve been rotating everyday. Scott working second-team is helping his reps and his chances a bit.

Showing base and nickel groupings, though I haven’t observed a lot of base snaps behind the 1’s. For nickel packages, expecting Ogunjobi to run first team when he’s full. Leal has seemed to get a lot of the 2nd team reps but my notes only had Davis next to Adams in sub so I put both of them second-team.

Spillane has been rotating in with the starters, essentially three starting ILBs on the team, even with the occasional Bush/Spillane pairing and no Myles Jack. Jack will be a starter but this is just how they’re working the group right now so I’m not even putting Spillane opposite anyone because he hasn’t paired with the other backups. The 3rd/4th string groupings are a little blurry but those are the pairings I’ve most often seen. I’d still take their pecking order with a grain of salt – don’t freak seeing Robinson ahead of Allen. The OLB rotation has been one of the few consistent and predictable aspects of camp.

Like ILB, Wallace and Witherspoon rotating a lot but they have gotten snaps on the field together and that first-team line reflects that. Joseph has played plenty in the slot this summer while also assuming his safety duties. Tons of players have worked in the slot with Maulet and Platel the only two full-time inside guys.

Another predictable group with more even lines until Fitzpatrick returns. When he gets back and Killebrew it healthy, there will be a 4th-team, making snaps more limited. Everyone on this list sans Edmunds is trying to take advantage of that. Edmunds role is the same regardless so he’s the exception.