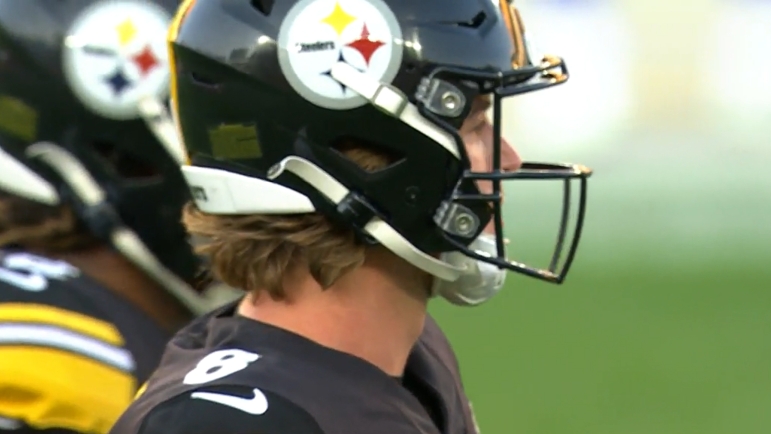 Close the book on Kenny Pickett’s first NFL summer. And by all metrics, it was a really good read. The first chapter, eh, maybe a little slow. But after that, you couldn’t stop turning the pages and waiting to see what was going to happen next.

Across three preseason games, Pickett looked poised, accurate, and most importantly, productive. He led touchdown drives in his first two games while ending things Sunday with a solid outing against the Detroit Lions. In speaking to reporters after the game, Pickett said he was happy with the job he’s done.

“I am,” he told reporters via Steelers Live. “I want to take what I get in stride. Put my best foot forward. I feel confident because of how prepared I am, how much I’ve put into it. Every game, I felt really confident with the gameplan and what I was going to see…I think it was a great first step in my pro career.”

Pickett’s first summer saw him complete over 80% of his passes, fire three touchdowns, and not turn the ball over once. No fumbles, no interceptions. Here’s the final tally.

It’s hard to poke holes in anything Pickett did. He had a quiet first week of camp but quickly settled in and took off the rest of the way, impressing in his debut against Seattle and never looking back. The best thing he did was be consistent, looking like the same guy in all three games. He didn’t push the ball downfield quite as often as Mitch Trubisky but Pickett still finished the summer with a 7.3 YPA, more than a full-yard higher than Ben Roethlisberger in 2021 (6.2) and exactly a yard better than 2020 (6.3). Crucially, Pickett dropped his snap-to-throw times way down by more than a half-second entering Sunday’s finale. He played on-time and as an anticipatory thrower with great accuracy as his completion percentage suggests.

While it was a strong collective showing, it was just one preseason. And Pickett has a long ways to go.

“I want to take everything I get in stride and keep moving forward.”

He’ll likely start the season a bit more static than forward, poised to open the season as the team’s #2 QB behind Mitch Trubisky, who seemed to cement his starting spot with a good outing Sunday. But Pickett’s future and looks bright and if he can carry over what he did in the preseason to when the games start counting, Pittsburgh will have found their next long-term quarterback, and Pickett’s book will become a bestseller.