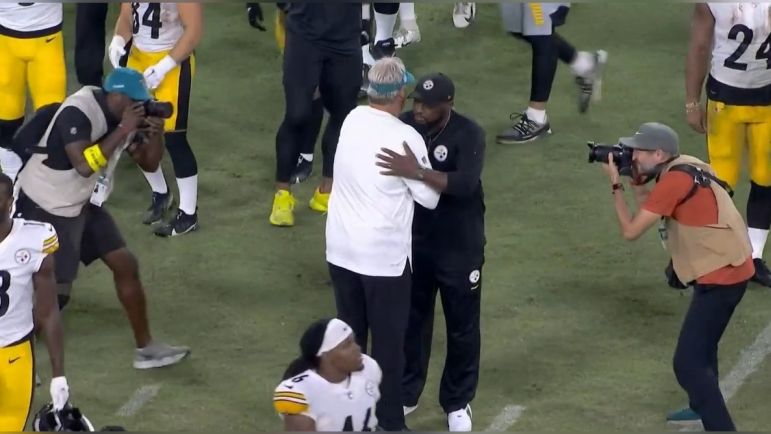 As an average Steelers fan, I always want the Steelers to win. But victories during preseason games are not so meaningful. Unlike the regular season, unit and individual player performances are much more important than wins and losses. But the two touchdown drives were satisfying and demonstrated some positive aspects of the team’s overall performance.

I watched this game from home sitting on my couch, so few atmospherics to discuss. Though I could break wind without worrying about overcoming bystanders with one of my random blasts.

The Steelers won the game, but most would agree that Jacksonville outplayed the men of steel. In fact, the Jaguars exposed some Steelers flaws.

The offensive line played poorly as a unit. The quarterbacks were forced to make quick reads, scramble, and pass quickly because the line provided little protection. I attribute the Jaguars safety to the offensive line.

The running game non-existent in part to no holes opening up and defenders hitting the runners in the backfield. The positives included Kenny Pickett and Mason Rudolph leading the offense to score touchdowns with under two minutes to play of their respective halves. The depth of the receiving corps also evident with players like Tyler Vaughns and Tyler Snead making key receptions.

On the defense, the run defense was particularly bad at the start of the game. Six runs for 36 yards or six yards per carry. I gave a close look at Devin Bush and just do not see the effort. I swear on one running play, he backpedaled to avoid contact. Surprised Bush recorded four tackles. I did not see them. Myles Jack, conversely, worked to shed would be tacklers and knifed in to make several tackles closer to the line of scrimmage. Robert Spillane also more aggressive at making tackles. Of course, Mike Robinson made the big hit in the second half. Delontae Scott very active but also called for roughing the passer on a crucial third down.

Mark Robinson hit this Jags' wide receiver three yards backwards on this play. Love the attitude and demeanor Robinson plays with. Pittsburgh might have something with him. #Steelers pic.twitter.com/E5DV5Sczvw

Other miscues included Chris Boswell doinking the goalpost while attempting a 53 yard field. But based on past performance may be excused as rustiness. But Mateo Durant losing control of a handoff is inexcusable even if he recovered the fumble and gained seven yards. That may cost him a roster spot as soon as Monday. Gunner Olszewski lost a fumble while trying to convert a fourth down. At least the ball was punched out and his other contributions outweigh that lapse.

Kendrick Green whiffed a block. It looks like he settled in for a bull rush and began stutter steps before contact. The defender just brushed by him. Green must quickly learn to time his moves so that defenders can’t read them so easily. Dan Moore was a revolving door. John Leglue almost had to piggyback defenders they were past him so quickly. Did anyone see a Steelers offensive lineman that blocked above average in this game?

Thank you, Ross McCorkle, for keeping us up to date on the game’s live update and discussion feed. Steelers Depot respondents contributed 781 first half and 699 second half comments.

The Mack captured many folks opinion in the first half by observing, “Bush needs to get cut.”

While Zach K put things into perspective. “I’m glad we are getting this reality check against the mighty Jags. Maybe that will cool down all the upgraded line talk.. Maybe the Seahawks are really that terrible.”

In the second half, The_Standard had the “best” post of the game with “Ok. Get Spillane off the field. If he gets injured Bush will have to play.”

Chris 92021 made two very popular observations: “Mark Robinson is a hitter unlike Devin Bush Jr.” and “Tough block for Rader. Not surprised it was holding. Can’t believe Canada called another end around/jet sweep though.”

Alevin16 liked the performance to win the game. “I am happy for MR, he deserves it.”

I could go on, but you get the point. The Steelers won and there were some good performances. But the state of the offensive line and the defense on running plays and third downs raise concern.

There is one more preseason game to play. Normally, the starters do not play  but that was in a four game preseason. The NFL owners and players association have opted to forgo honing their product for profits. The old saying, “less is more.” On Monday, five more players will be released. Perhaps a couple that muffed an opportunity to shine against Jacksonville.

The Steelers are not ready for prime time. I’m not sure if they will be after playing Detroit unless something is done to fix the flaws exposed against the Jaguars.

I always like to include a bit of music. The Steelers offensive line looked like a bunch of drunken sailors trying to contain the Jaguars defenders. Here is Drunken Sailor by the Irish Rovers.