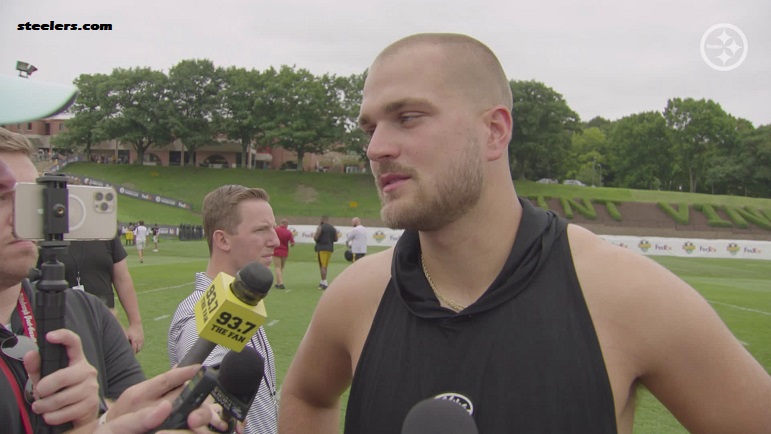 Shortly after training camp got underway in Latrobe at Saint Vincent College, Pittsburgh Steelers TE Pat Freiermuth pulled up in practice with what appeared to be a hamstring injury. Mike Tomlin would later characterize the injury as such, calling the second-year TE day-to-day. Freiermuth would end up sitting out of practice for ten days, but returned to full participation yesterday.

Appears Pat Freiermuth (hamstring) will not practice for the second straight day. But no need to rush him. Miles Killebrew (pec) also doesn't appear to be working today.

After practice concluded Wednesday, the media caught up with Freiermuth to ask him about several plays in practice as well as how he feels coming off his second practice after rehabbing back from  the hamstring strain.

“I feel real good,” Freiermuth said after practice on video from Steelers.com. “We’re getting back into it, knocking some rust off, but feel good and pretty cool.”

Based on Freiermuth’s ramp up timeline, it’s safe to say that he dealt with a Grade I hamstring strain. These strains are often characterized as mild in nature and often occur when physical activity is increased at a rate that the athlete is not quite yet adapted for. The strain normally occurs when an athlete is running or cutting and attempts to contract eccentrically to decelerate flexion of the hip and extension of the lower leg, creating a lot of tension to the muscle fibers of the hamstring, thus leading to a potential strain/tear.

We often hear of soft tissue injuries occurring in the early stages of training camp as athletes pick up athletic activity compared to where they were at previously in their own training. The longer intense practices along with heat and potential dehydration can lead to pulled muscles if not careful which appeared to be the case with Freiermuth and his hamstring.

The protocol for a Grade I hamstring involves rest along with potential compression and icing of the affected area if inflammation is high. Symptoms of a Grade 1 strain tend to pass anywhere between 2-5 days and then activity is slowly picked up the days following to prevent straining the muscle again or potentially doing more damage. Activity usually progresses from light stretching and walking to deeper stretching, eccentric lifting movements, and jogging before getting back to full-speed sprinting.

Devin Booker has a “mild” right hamstring strain (Grade I)

Coming off two straight days of practice, it appears that Freiermuth has made a successful comeback from a slight setback to start training camp. The big thing now is to stay on top of proper pre-practice/lift warmup to not over-exert the muscle again as the team progresses from through the preseason into the regular season. However, given Freiermuth’s comments, it looks like he is ready to roll.