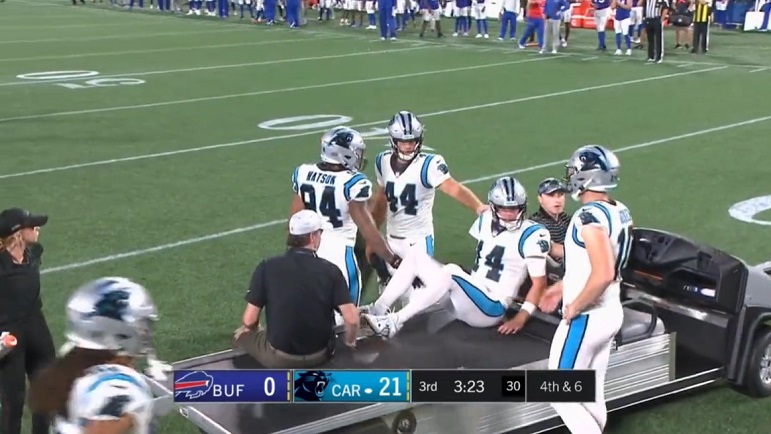 The Carolina Panthers have already lost rookie quarterback Matt Corral for the season due to an injury and Friday night they may have lost fellow backup quarterback Sam Darnold for an extended period of time due an ankle injury that he sustained in the third quarter of team’s preseason game against the Buffalo Bills.

Darnold needed to be carted off the field Friday night after having his left ankle severely twisted when it was caught underneath a Bills defensive player. Darnold was able to put some limited pressure on his injured ankle as he was helped to the cart that was brought onto the field to carry him off to the locker room. The fact that his ankle wasn’t immediately put into an air cast while on the field might be a positive sign.

Should Darnold’s injury sideline him for an extended period time, quarterback P.J. Walker would presumably move into the backup role behind starter Baker Mayfield, pending the Panthers adding another quarterback from the outside. Entering the Friday night game, Walker was a combined 18-of-34 passing for 243 yards with no touchdowns and two interceptions with six sacks in the Panthers first two preseason games.

Might the Panthers become a team interested in trading for Pittsburgh Steelers quarterback Mason Rudolph sometime next week? It’s obviously way too early to tell at this point as such a move might depend on the severity of Darnold’s ankle injury.

Earlier on Friday, Ian Rapoport of the NFL Network reported that Rudolph is drawing trade interest from “around the league.”

“My understanding is there is some interest around the league in a potential trade of Mason Rudolph, Rapoport reported. “Sounds like the Pittsburgh Steelers would listen at the right price. We’ll see, come Tuesday, if they’re able to do a deal for Mason Rudolph.”

Pittsburgh does somewhat have a link to the Panthers as Carolina’s owner is David Tepper, who was previously a Steelers’ shareholder prior to him purchasing his own NFL team in 2018.

It will be interesting to hear Panthers head coach Matt Rhule give an update on Darnold’s ankle injury at the conclusion of his team’s Friday night preseason game against the Bills.