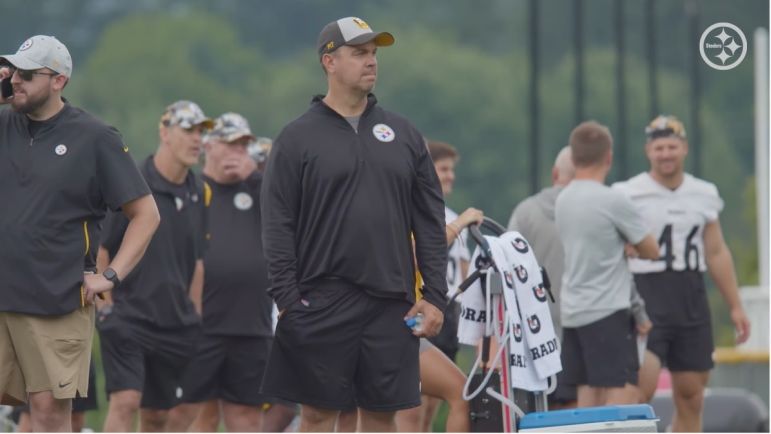 For the first time in 22 years, the Pittsburgh Steelers hired a new general manager. For the first time in franchise history, they hired an assistant general manager. Omar Khan replaced Kevin Colbert this summer, a predictable and expected move, an internal passing of the torch. But the team went outside the organization to hire Khan’s right-hand man, bringing in Andy Weidl over from the Philadelphia Eagles and naming him the team’s first assistant general manager. On a recent episode of The Standard, the Steelers’ web series, Khan spoke to why he decided to hire Weidl.

While Weidl can be classified as an outside hire, as Khan notes, he has internal roots. Weidl grew up in Mt. Lebanon and his family had a strong relationship with Tom Donahoe, de facto GM of the Steelers at the time. Weidl’s first NFL job was as a Steelers’ intern, working for the team in the late 90s, departing just after Colbert was hired. Since, he’s worked as an area scout and climbed up the ranks in the Eagles’ front office, essentially running their drafts the last three seasons. Weidl was interviewed for the Steelers’ actual GM job before being tabbed as the assistant.

We did a deep dive into Weidl’s background and philosophy shortly after the hire.

The Big Book Of Andy Weidl

Hiring Weidl was Khan’s literal first move as assistant GM and it was a big one. While it’s unfair to paint Khan as just the “cap guy,” his first NFL jobs were on the scouting/coaching side, and he’s been in a strong organization for more than two decades, the relationship between Khan’s business/CEO background and Weidl’s scouting experience is critical. How well the two work together to evaluate, delegate, and cooperate as they both step into new roles will determine how successful they are running the Steelers.

As Mike Tomlin says, we have a tendency to overcomplicate things. As the Steelers’ model has proven, all you need are good, smart people leading your organization. They’ll figure out the rest and build a winning team. That was Chuck Noll. That was Bill Cowher. That was Kevin Colbert. That’s Omar Khan and that’s Andy Weidl. Now all that’s left is to go out and do the job.