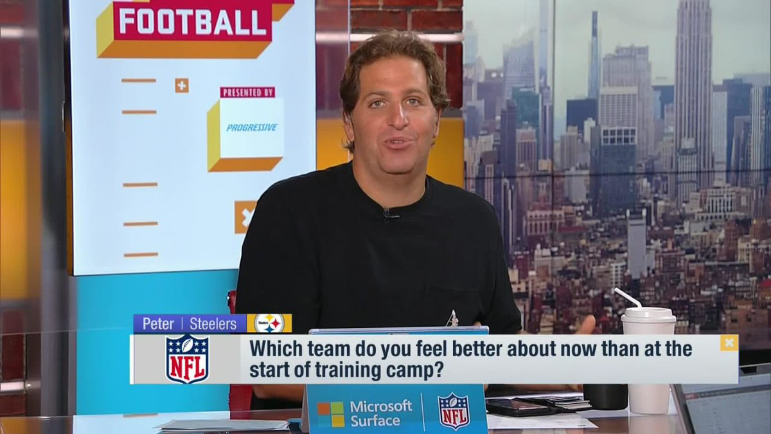 It’s important to note that it’s just preseason action, but could the showing by the Pittsburgh Steelers — especially offensively under center — in the first two preseason games be changing some opinions of the black and gold ahead of the 2022 season?

That seems to be the case, at least for NFL Network analyst and Good Morning Football co-host Peter Schrager. Appearing on GMFB Tuesday morning on NFL Network, Schrager highlighted the Steelers as the team that he feels better about now compared to how he did at the start of training camp.

Thanks to the play of all three quarterbacks in Mitch Trubisky, Mason Rudolph and rookie Kenny Pickett, and the emergence of rookie wide receiver George Pickens, Schrager is feeling pretty good about the Steelers moving forward offensively under second-year offensive coordinator Matt Canada.

“I did not know what we were getting with the Steelers and I am still not one hundred percent sure that the offense is going to look as good as its looked this preseason, but gosh, if it doesn’t give you a little bit more confidence going into this season than you felt a month ago that there’s going to be a life after Ben [Roethlisberger],” Schrager said on GMFB Tuesday, according to video via NFL.com. “Whether it’s Trubisky, whether it’s Pickett, you add in this rookie George Pickens…I’m just watching this Steelers team three weeks into preseason, and it’s like ‘oh, this quarterback can move a little bit’ whether it is Trubisky, Pickett or even Mason Rudolph.”

It’s hard not to feel good about the direction of the offense, at least under center at quarterback and at the skill positions, like Schrager pointed out in the segment. Trubisky and Rudolph have had strong training camps, and Pickett is coming on quickly in an effort to push for the starting job.

Which team do you feel better about now than at the start of training camp? | 'GMFB' https://t.co/Zr4B9VRfOO #Steelers pic.twitter.com/gGX7UJT3UL

At receiver, Pickens has had an other-worldly training camp and looks like the clear-cut No. 2 in Pittsburgh, pairing with Diontae Johnson, Chase Claypool and Pat Freiermuth to form a strong quartet of passing game options for the black and gold. Then there’s star running back Najee Harris in the backfield, who could have a monster second season in the NFL.

Defensively, the Steelers remain stout overall led by T.J. Watt, Cameron Heyward and Minkah Fitzpatrick, and have a strong coaching staff overall under head coach Mike Tomlin. The only real concern with the Steelers at the moment remains the offensive line and the play of the inside linebackers, to areas that aren’t exactly easy to hide in the Steelers’ scheme.

Still, Schrager feels really good about the Steelers now compared to how he felt prior to training camp.

“If you are a Steelers fan or an observer from the outside, this isn’t a rebuild by any means. They still have T.J. Watt, they still have Minkah Fitzpatrick, and oh, yeah: they still have Cam Heyward lining up right there against the opposition every single down,” Schrager added, according to video via NFL.com. “Steelers, I was thinking ok, this might be a bounce back year. Now, I’m thinking the offense might not miss a beat under Matt Canada…this might be more his comfort zone compared to a 38-year-old quarterback last season.

“They’ll miss Ben’s leadership, no doubt, but I feel much better about the Steelers heading into September compared to how I felt heading into August.”

That seems to be the general consensus right now with the Steelers, based on how the offense has looked through two preseason games. It’s important to note it’s just preseason, but the offense looks completely different compared to what was shown on tape in 2021 in Roethlisberger’s final season.

If the offense can be better than it was in 2021 on the ground and through the air, and the defense remains stout, Pittsburgh could surprise some people across the NFL.