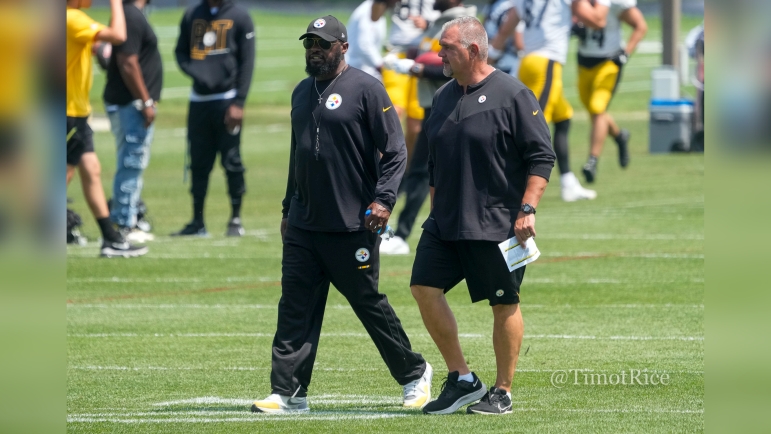 When thinking about the Pittsburgh Steelers chances of competing ahead of the 2022 season, many believe that Pittsburgh will go through a rough, up-and-down period of transition this season due to the number of changes on offense, specifically under center, along with a below average offensive line and some questions of depth in the secondary.

That’s certainly an understandable stance to take regarding the Steelers, who will be without quarterback Ben Roethlisberger — who kept them competitive and won a lot of games late — for the first time in 18 seasons, not to mention being without veteran GM Kevin Colbert, who retired in May.

Still, one NFL analyst believes that there’s certainly a path to contending for a Lombardi Trophy in 2022 for the black and gold. No, seriously, Go Long founder Tyler Dunne, appearing on 93.7 The Fan Monday morning with hosts Adam Crowley and Dorin Dickerson, stated he believes there’s a path to contending for a Super Bowl in 2022 for the Steelers.

That path features Mike Tomlin rather heavily, Dunne said, according to audio via 93.7 The Fan. That’s, in large part, due to Tomlin’s ability to maximize the talents of everyone on the roster, leading to his string of non-losing seasons since he took over as the head coach in Pittsburgh in 2007.

“He just always is going to find a way to maximize the talents within every single player on his team,” Dunn said to Crowley and Dickerson Monday, according to audio via 93.7 The Fan. “What does it take to kind of go beyond that, to get over the hump? It’s been awhile since they’ve won playoff games and Super Bowls. I think that you’ve got studs on each level of the defense in T.J. Watt, obviously, Cam Heyward, Minkah Fitzpatrick — they’re all over the place.

“Stop the run a little better, and you get something out of the quarterback. You have such a great group of receivers there, and you’ve got a top 10, maybe even better than that, running back,” Dunne added, according to audio via 93.7 The Fan. “If you can just get a little bit more out of quarterback than you got last year, there’s a lane for the Steelers to be competing for a Super Bowl, absolutely.”

Looking at things from a 30,000-foot view, there are certainly pieces in place for the Steelers to truly surprise many and really compete as a contender for the Lombardi Trophy with some of the best teams in the league. A lot rides on the play of the standout defense that, as Dunne says, has studs at all three levels in Heyward, Watt and Fitzpatrick. Depth defensively seems rather strong overall with the defensive line having the likes of Tyson Alualu, Larry Ogunjobi, Chris Wormley, Isaiahh Loudermilk and rookie DeMarvin Leal all ready to handle snaps in 2022.

“We’ve got to be the Black Hat. We have to be the Party Crashers."

Our @GoLongTD Camp Tour continues with a look at the #Steelers. I chatted with Cam Heyward, who makes it clear that Mike Tomlin wants his team to be "villain" in 2022. https://t.co/LpkrhjY87l

Inside linebacker seems to be in a good place early in training camp with free agent signee Myles Jack off to a strong start, and Robert Spillane competing heavily with Devin Bush for the other starting job. Then there’s Alex Highsmith poised to take a significant step forward in 2022 opposite Watt as a good pass rusher overall.

The secondary — specifically cornerback — is a bit of a concern behind Ahkello Witherspoon, Cam Sutton and Levi Wallace, but overall those three seem like a good place to start from. Then there’s Fitzpatrick and Terrell Edmunds returning as the starting duo at safety, with names like Damontae Kazee and Tre Norwood providing versatile, intriguing depth.

Offense will remain the huge question for the Steelers though, especially under center. Mitch Trubisky, Mason Rudolph and rookie Kenny Pickett are all competing for the starting job, with Rudolph looking like the best of the bunch in training camp to date. Getting more out of the quarterback position compared to last season will be something to see, as Roethlisberger was great late in games, setting career highs in game-winning drives and fourth-quarter comebacks.

Of course, with stronger starts to games and more consistency pushing the football down the field through the air, the Steelers might not need those late-game heroics in 2022.

In the trenches, the Steelers have to be much, much better than they were in 2021. Free agents James Daniels and Mason Cole should certainly help that, but growth from Dan Moore Jr., Kevin Dotson, Kendrick Green and Chukwuma Okorafor is greatly needed for this unit to take a true step forward.

Skill players Najee Harris, Pat Freiermuth, Diontae Johnson, Chase Claypool and rookies George Pickens and Calvin Austin III should greatly benefit from the change at quarterback with whomever wins the job, but believing there’s a path for Super Bowl contention, legitimate contention too and not just making the playoffs, feels like a stretch overall for the Steelers, at least right now with so many questions.

With Mike Tomlin at the helm though, and knowing his team is always in the mix, don’t overlook the 2022 Steelers.