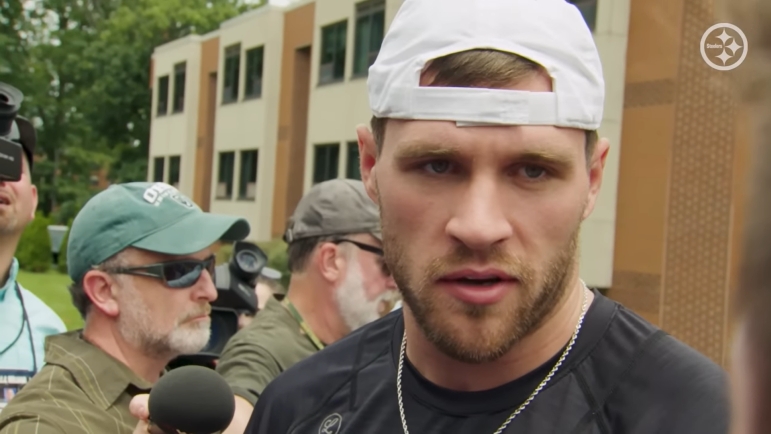 Talking to the media before practice today, Pittsburgh Steelers outside linebacker T.J. Watt praised the performances of fellow linebackers Devin Bush and Myles Jack in an interview posted to the team’s website.

“I think it’s still early, obviously guys are making a lot of plays, but like we talk about, you can’t win off of lack of execution on the other side. you gotta be able to have clean, nice wins, good execution on your side. I think there’s a lot of guys doing some really good things. I think Devin looks nice inside. Myles Jack looks good inside. Guys are coming down, taking the double teams off the big guys, so it’s been nice to see.”

With the team’s struggles at the inside linebacker position last year, it’s a positive that Watt sees Jack and Bush as two guys who have stood out so far. It’s still early, and we won’t really be able to get a good look at the two of them until the preseason, but their early returns have at least been promising.

Jack was signed largely due to the problems the team had at the position last year, with Bush really struggling in his return from a torn ACL and Joe Schobert not providing much. With Jack, Bush and Robert Spillane, the Steelers are hoping the position is a lot more settled this year. If they get improvements at inside linebacker, the porous run defense the Steelers had last year should hopefully be improved.

Execution and getting back to the basics will be the key for Pittsburgh’s run defense this year. They’re going to need everyone to step it up from last year, but it really will start with better play from the inside linebacker group. Too often, they filled the wrong hole or missed tackles and let running backs advance to the third level. On the defensive line, Tyson Alualu’s expected return should help things, but the inside linebacker group really needs to step it up. For Bush and Jack, they’re both trying to prove they earn a starting job with Robert Spillane also rotating in for first-team reps. Mark Robinson and Ulysees Gilbert III have also looked good so far in camp per Alex Kozora, so with a lot of guys pushing for reps, there’s pressure on Bush and Jack. Both guys have clearly impressed Watt, the reigning Defensive Player of the Year, and if they can impress the coaching staff too, they’ll likely be the Week 1 starters at inside linebacker.