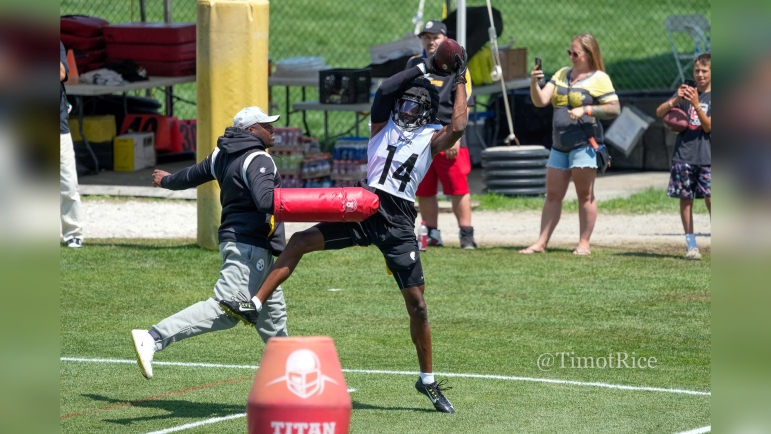 One of the key calling cards for new Pittsburgh Steelers wide receiver George Pickens coming out of the University of Georgia was not only his impressive combination of size, strength and speed, but also the rather impressive body control overall for a guy his size.

Early on in training camp for the Steelers at Saint Vincent College in Latrobe on Chuck Noll Field, Pickens has put that body control on display, twisting, turning and vernally contorting his body in impressive fashion to make plays in the air, drawing plenty of praise from onlookers in Latrobe.

Throughout his career with the Bulldogs, that was the biggest thing that stuck out on tape with Pickens, who caught passes from a handful of quarterbacks during his time in Athens.

Now, early in his Steelers career, his body control is flashing a ton for the black and gold, drawing questions from media members Monday ahead of his first padded practice for the Steelers. To hear Pickens talk about his body control and ability to contort in the air and make plays above the rim, it’s something that’s always come naturally for the big, physical receiver.

“Ever since I was like seven, I’ve just been working,” Pickens said to reporters Monday, according to video via Steelers.com. “I always kind of had it…I guess I would say I’m blessed.”

Body control, especially in the air, for a receiver is something you’re either born with or not. It’s not truly something you can work on and improve overall, though many do try. Fortunately for Pickens and the Steelers, the young receiver was born and blessed with body control, which helped him make the switch from the secondary as a young player in youth football to the wide receiver position, helping him become a prized recruit, a star at Georgia, and eventually a top 75 draft pick in the 2022 NFL Draft.

Still, despite the natural body control and the natural height, weight and speed for the position, Pickens didn’t always try and play as a bigger receiver like, say, Randy Moss, whom he mentioned in the media session Monday. Instead, Pickens tried to train like a smaller receiver and bring that shiftiness and suddenness to the game, making him an impressive combination of traits on the field.

So far, the traits have shown up in an eye-popping way. When something comes naturally, it tends to show up time and time again.

George Pickens is going to climb the ladder a few times in the black & gold #Steelers #NFL pic.twitter.com/IP7LzjU6WV

“It [body control] just came naturally,” Pickens said to reporters Monday, according to video via Steelers.com. “Naturally I wanted to do a different bit of drills the taller I got…some people get tall and they just start working on just regular stuff that you already blessed with. Well, I just started to model my game after a little guy and try to…improve it that way.”

Modeling his game after smaller receivers and truly working on his suddenness, flexibility and more has led Pickens onto the verge of stardom in the NFL, based on how his first training camp has started in Latrobe in recent days.