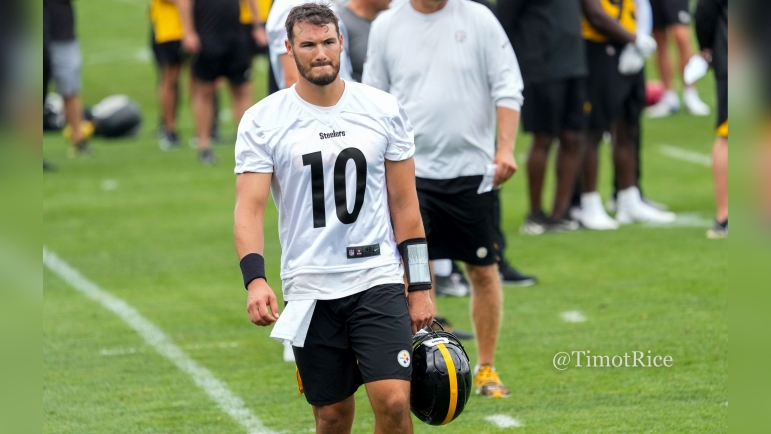 Earlier today, Mitch Trubisky talked to Bryant McFadden and Jonathan Jones of CBS Sports HQ and was asked who on the team has surprised him since the start of training camp.

“Not that it’s a surprise just cause he’s a rookie, but George Pickens, definitely George stood out the type of catches he’s made, his ability to separate and go up and, and catch the football and then Calvin Austin. So our two young guys, two great picks and they’re both gonna be great players. So we just gotta get those guys the ball in their hands and let them do special things with it, cause they’re gonna be great players in this league,” Trubisky said.

Pickens and Austin III looking good so far is obviously a good sign for Pittsburgh’s offense. JuJu Smith-Schuster, Ray-Ray McCloud and James Washington departed from the wide receiver room in the offense, and Pickens and Austin were drafted to help try and replace some of the production the team lost. If they’re able to do so as early as this year, the Steelers offense could be better than expected.

Trubisky is in his sixth training camp now, so he knows what attributes and the sort of effort it takes to be a good player in the league. It’s still early, but it’s welcome to hear that after two-plus weeks of camp, Trubisky feels that both Pickens and Austin can be impact players in the NFL.

It will be interesting to see how much both Pickens and Austin contribute as rookies. Pickens will likely put up better numbers than Austin, but the potential for splash plays is always there with the latter. With Matt Canada’s offense being run the way he wants versus the way Ben Roethlisberger wants, there might be more of an opportunity for Austin to get touches in jet or motion plays. In addition, Trubisky should have a stronger arm than what we saw from Roethlisberger last year, which could allow for some deep shots downfield to the speedy Austin.

I think both receivers will undoubtedly have a role in the offense this year, it’s just a matter of how and how much. I wouldn’t be surprised at all if Pickens cleared the 50 reception mark as a rookie and potentially around 700ish yards. A lot of the wide receiver production will depend on the quarterback situation, but if Trubisky or another starter are able to perform at a league-average level, I think both guys will be consistent contributors for the offense.

Trubisky is widely expected to be the Week 1 starter based off his pedigree and his work so far in camp. If he says he wants to get the ball in the hands of Pickens and Austin, the two of them could see the field early and often. We’ll get our first glimpse at the two of them against another opponent on Saturday night when Pittsburgh takes on the Seattle Seahawks in their first preseason game.