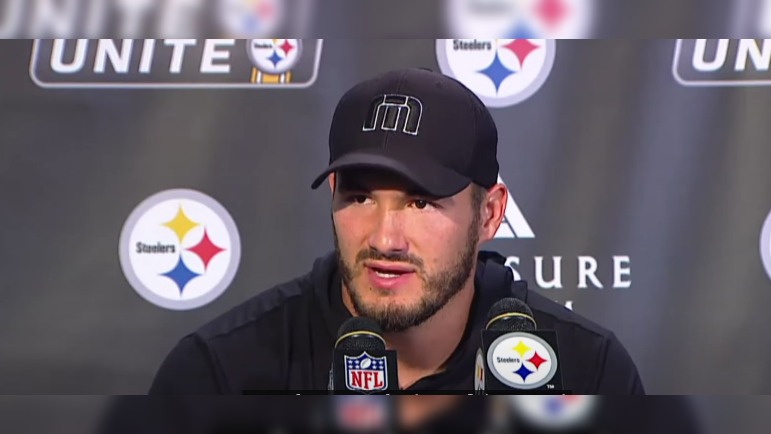 The Pittsburgh Steelers defeated the Detroit Lions 19-9 Sunday evening to push the team to a 3-0 preseason record. QB Mitch Trubisky played a big part in the victory by lead multiple scoring drives and showing improvement as a passer down the field.

When asked if he felt like he’s done enough to be named the starting quarterback for the Pittsburgh Steelers come Week 1 against the Cincinnati Bengals, Trubisky acknowledged that he is confident his performance thus far this preseason will speak for itself when the coaches come to a decision.

Mitch Trubisky on the win over the Lions and more ⬇️ pic.twitter.com/nvIjgl2XPg

Trubisky capped off his preseason action with a successful drive down the field in the two-minute offense which ended with a TD pass to Steven Sims in the red zone. Trubisky showed poise in the pocket despite pressure coming at him, being able to hit receivers down the field as well as create for himself with his legs to extend plays or scramble when nothing was there.

When asked about what he likes the most of what he’s done this preseason, Trubisky spoke about not only his personal development as a player, but the overall development as an offensive unit.

“I think that I’ve just shown that I can run this offense,” Trubisky said. “I could lead this offense and I have what it takes to help this team win games.”

Trubisky had a strong outing in his Steelers debut Week 1 against the Seattle Seahawks where he scored on his first drive. However, he met adversity last week against the Jacksonville Jaguars as he was running for his life for most of the afternoon due to poor blocking upfront. He managed to rebound and had a strong showing in the preseason finale, playing the entire first half with the first team offense and showcased the qualities you want to see in a starting QB.

Multiple reports have surfaced suggesting that Trubisky is going to be the team’s starting QB to open the season against the Cincinnati Bengals Week 1. Trubisky has shown he is deserving of the job given his preseason finale and will look to build off of the exhibition play as Pittsburgh prepares to take on their division rival in two weeks’ time.