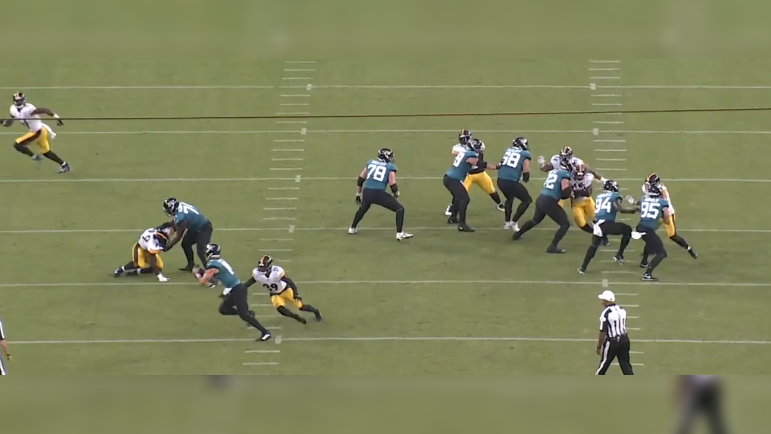 Two weeks into the preseason and the Pittsburgh Steelers are looking rather sharp in the tackling department, for the most part.

Granted, there remains some major issues in that area, especially late in the game from guys fighting for a roster spot, but overall the Steelers continue to tackle at a solid rate, which is great news at this point in the season for the black and gold.

That said, a guy like second-year safety Donovan Stiner doesn’t feel long for the roster at this point. As you’ll see below, he missed another pair of tackles Saturday night, and currently leads the team in misses in the preseason. It’s becoming a glaring issues with him, one that he better correct in a hurry or he’ll find himself on the outs.

Let’s dive into the missed tackles report for the second preseason game against the Jaguars.

As you can see, Stiner continues to struggle at an alarming rate for a guy who is seeing a lot of action in the preseason. He’s around the football a decent amount, which is nice, but he has to become much more consistent getting guys on the ground.

The same goes for Damontae Kazee, who missed another tackle on Saturday night in space, leading to an explosive play for the Jaguars. He’s a real chess piece defensively and is great to have on the roster, but there’s just a little bit of concern creeping up for me in the tackling department.

Let’s check out some misses.

I’ll start with Minkah Fitzpatrick’s miss on a sack attempt of Jacksonville’s Trevor Lawrence in the first quarter. Fitzpatrick does a fantastic job hiding his blitz until right before the snap and then has a free lane to Lawrence, who has his back to him on the play-action fake.

That’s a play he has to finish though. Lawrence is certainly mobile and has really good pocket awareness and movement, but Fitzpatrick has to finish that one off and take a bit of a better angle to the quarterback in that scenario without giving him a lane to get out of.

Later on in the game, new linebacker Myles Jack — in his return to Jacksonville – recorded his first miss of the preseason.

Jack, playing alongside Robert Spillane in the second quarter, does a great job ducking under the block attempt from the Jacksonville lineman attempting to cut him off for the running lane for running back Travis Etienne.

Jack does everything right here, except get Etienne on the ground. It’s a tough play overall, especially after slipping under the block, but the old saying is if you’re going to slip/duck under a block, you better make the play. Jack doesn’t.

In the third quarter, Kazee missed a tackle in space, resulting in a splash play for the Jaguars.

Kazee does a good job tracking downhill to make the stick at the catch point, but he doesn’t wrap up after ducking his head and slides off of the spinning Jones easily. In the process, Kazee takes out teammate Tre Norwood, allowing Jones to get loose.

The veteran safety does a good job recovering to pitch in with Stiner to make the stop, but the initial miss was a tough one to see from the sixth-year safety.

Finally, in the fourth quarter Stiner, Norwood and Justin Layne all recorded misses on Jones’ 53-yard catch and run from rookie quarterback E.J. Perry on a short throw over the middle. Throw short, run long. Yikes.

Stiner does a good job coming downhill to close in on Jones, but he’s out of control and never breaks down, leading to an arm tackle attempt that ends in a woeful miss.

From there, Norwood and Layne both miss on diving attempts, taking out Buddy Johnson in the process, leading to significant green grass for Jones to fun through, sparking the Jacksonville offense.

Fortunately for the Steelers, Layne made an interception on a gift throw from Perry later in the drive, setting up Mason Rudolph’s go-ahead touchdown drive, eventually giving the Steelers the win.

Good news here is that Mitch Trubisky is certainly getting his work in behind the Steelers offensive line, forcing a game-high four missed tackles against Jacksonville, all of which came on the opening drive.

He was under duress a ton throughout the game Saturday, but was able to use his legs and extend plays outside of a collapsing pocket. That’s largely what they brought him in for, but it was not ideal for him to need to run for his life early in the game at Jacksonville.

The Steelers can’t make a habit of this from Trubisky or else he’s not going to make it through the season healthy. That said, this is nice to see from him. That ability to maneuver in the pocket, extend plays and give the offense a fighting chance behind a rough offensive line was missing last season, no disrespect to Ben Roethlisberger. That’s just the truth.

Speaking of a rough offensive line, if it’s going to be this way moving forward, the Steelers will need a backup running back that can force misses at a high rate. Jaylen Warren fits that mold.

Against Jacksonville, Warren forced two more misses and currently leads the team with seven in the preseason.

This run in the third quarter showed what Warren is all about. He has the speed to push the run horizontally but also has the power to shed a guy like No. 1 overall pick Travon Walker behind the line of scrimmage, turning a 2-yard loss into a 2-yard gain.

Finally, though the fourth and one jet sweep to Gunner Olszewski ended in disaster with a fumble, the effort from the veteran wide receiver was downright incredible.

I greatly appreciate the effort from Olszewski. The ball security needs to be a bit better, obviously, but for a play that was doomed from the start, Olszewski certainly made it close for the Steelers on fourth and one.