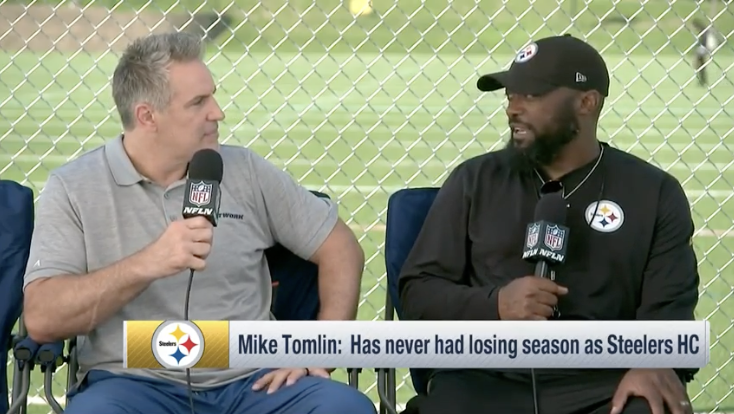 Entering his 16th season as head coach of the Pittsburgh Steelers, Mike Tomlin is looking for any sort of edge he can get when it comes to remaining connected to an ever-changing landscape of players in the NFL, while also trying to get a leg up on his fellow coaches overall.

Sometimes, that edge or leg up can be found in some strange places. This offseason, that place for Tomlin comes via Instagram. Tomlin, who is very rarely on social media despite having a Twitter account with 451,000 followers, decided just one day before the start of training camp at Saint Vincent College in Latrobe that he was going to join Instagram.

So far, Tomlin is up to 53,600 followers on the popular social media platform. Jumping into Instagram is something that allows him to challenge himself to better understand the new wave of players, while also keeping himself from getting comfortable overall heading into his 16th season at the helm of the Black and Gold.

It’s all part of a checklist each season that helps him prepare for the journey ahead, he told hosts Kurt Warner and Scott Hanson Wednesday on Inside Training Camp on NFL Network, according to video via NFL.com.

“It’s always a myriad of things. I have a standard checklist that’s never changing. It’s procedural things over a 12-month calendar, whether it’s self scouting trends in the game and all three phases and things of that nature. But there are also things that kind of hit me in the forehead,” Tomlin said to Warner and Hanson, according to video via NFL.com. “Things that may be more intangible-related this offseason. I’ve been focusing on expanding my social media knowledge, and appreciation in an effort to connect with today’s players. And so, I’m a full-time Instagram participant now, just dipping my toes in the water, because, you know, as you mentioned, when you have a job for 16 years, I don’t want to ever get comfortable.

“I always want to be working to grow and stay connected. And that’s just a component of today’s player in today’s game that I can’t run away from.”

Tomlin certainly is unique overall in the way he approaches things, and that’s exactly what he’s doing with the social media trends and the brand building with young players in today’s game coming from the NIL landscape in college into the massive media machine that is the NFL.

It is a bit curious that Tomlin took this route to try and connect to players in today’s NFL, especially in light of recent comments made by former Steelers quarterback Ben Roethlisberger, who lamented the “me-first” player mentality in today’s game. Those types of players seem rather misunderstood, and the move to Instagram for Tomlin, at least to an outside observer, seems to be driven to get into that atmosphere with today’s players, and better understand what’s going on.

Doing so and connecting better with the younger generations could lead to Tomlin having even more success as the Steelers’ head coach as the team transitions into a new era in the front office, on the roster and from a business standpoint, as well.

Some will take issue with Tomlin getting more involved in social media, but really, his move is driven to affect the product on the field and the culture in the locker room. That’s a win overall for the Steelers. Plus, he’s got to be on of the coolest head coaches in the NFL on Instagram now.