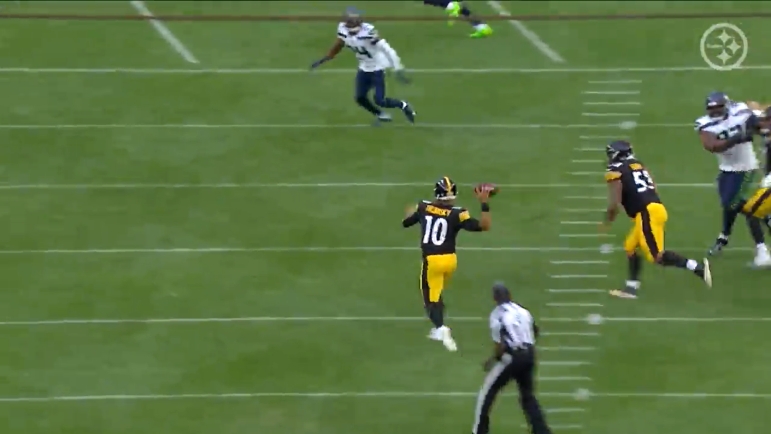 Despite having the most high-profile quarterback battle in the league, the Pittsburgh Steelers’ candidates at the position offered up an encouraging debut on Saturday night in the team’s first preseason game, which has drawn praise from the national media and fueled debate as to who should start.

Mitch Trubisky opened the game and played two drives, leading to one touchdown. Mason Rudolph followed and scored as well with a highlight-reel deep pass to rookie George Pickens. Then rookie first-round pick Kenny Pickett scored twice in the second half, including the game-winning touchdown.

And to their credit, they all did that with protection from the offensive line that wasn’t always so protective—with the linemen themselves being the first to admit it. Dan Moore Jr., for example, said after practice yesterday via the team’s website that “There was a lot” of instances of the quarterbacks on the ground in the first quarter, when the starting group was in the game. But head coach Mike Tomlin saw all three of his quarterbacks stand tall.

“I don’t think that they blinked, any of them, in the face of whether it was pressure or some of the challenges of coverages”, he told reporters during his post-practice media availability yesterday, via the team’s YouTube channel. “I thought the quarterbacks did a good job in the football game”.

All three were able to use their escapability to elude pressure and either extend a play by moving the pocket or actually scrambling. Pickett had three scrambles during the game, mostly late on the final two drives, one a key third-down conversion.

Of course, they did take a few sacks, Rudolph in particular being strip-sacked after Moore was beaten around the left edge. Pickett was sacked on a questionable play call that had him rolling out to his right on a 4th-and-1 play that was nearly very costly, if not for the defense quickly forcing a turnover.

But that outcome gave the rookie the opportunity to step up and lead the ensuing game-winning drive. Tyler Vaughns helped to make that more special by taking a 10-yard out designed to set up an easy field goal in for a touchdown, thereby making his quarterback look even better, but so much of the offense is predicated upon the ability to put your playmakers in position to make plays.

That was the bread and butter of the late stages of the Ben Roethlisberger offense, but the Steelers are hoping that moving forward they can be more flexible, and that does extend to improved play from the offensive line, admittedly a not insignificant hindrance over the past few years.

They went out and signed a couple of new starters in free agency, but neither of them shined in the first preseason game. James Daniels has not quite lived up to the billing so far. But in their defense, this is a very new group with new pieces learning a new system, and we’re only in the incubation stage. They have to get better than this. But there is time for that. And the mobility and poise displayed in the opener from the quarterback position will help buy them a little more.