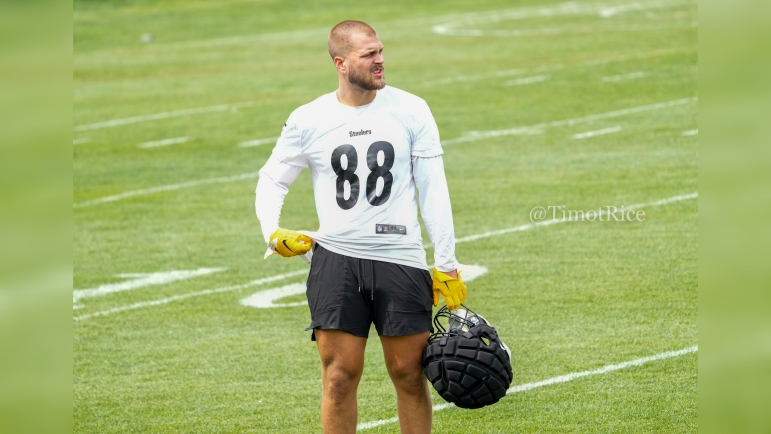 In his press conference after practice today, Mike Tomlin praised Pat Freiermuth and said he expects the tight end to take a step forward in his second year, via a tweet from Steelers Live.

“Pat’s done a good job getting on a moving train. He missed some time because of injury, but he’s a wired-in young guy. But it’s still uncomfortable with young guys missing time. It’s reasonable to expect him to take a significant jump here in year two, in spite of the success that he had last year, because he’s got the knowledge and the experience associated with where he is. I expect him to continue to work hard and continue to be a guy on the rise, and I’m excited for what 2022 may hold for him,” Tomlin said via official transcript provided by the team.

Freiermuth’s continued development is important for Pittsburgh’s offense. As a rookie, he had 60 receptions and 497 yards to go with seven touchdowns. That yardage total will likely increase this year, and I wouldn’t be surprised if he picked up a few extra receptions as well.

While Freiermuth has missed time with an injury this offseason, it’s more of a normal offseason than he even had last year, given there were still some COVID-19 restrictions and the Steelers’ training camp wasn’t at St. Vincent College. Freiermuth has the potential to be a top tight end in the league, and he can start to take steps toward that ceiling with an improved performance this year.

Freiermuth didn’t play against Seattle last Saturday, but he could make his preseason debut this Saturday against the Jaguars. The tight end room as a whole finished with five receptions last week, and I’m curious to see how many targets Freiermuth may get from Mitch Trubisky if he plays on Saturday. If his target volume is high, it’s a good sign that Trubisky trusts the young tight end and he could see consistent targets during the regular season, which would obviously have the potential to boost his numbers.

Outside of a few moments (namely the fumble against Detroit last season), Freiermuth was rock-solid as a rookie. He did pretty much everything he was asked to do, and with another year under his belt, I have a feeling that he’s going to take a big leap this year.

This group of pass catchers has the potential to be a lot better than the group was last year. While last year’s team was dealt a blow with JuJu Smith-Schuster’s injury, I think with Diontae Johnson, Chase Claypool, George Pickens and Freiermuth as the top four options, this year’s group can make some noise and be a little bit under the radar. There’s only so many targets to go around though, so it’ll be interesting to see what happens.