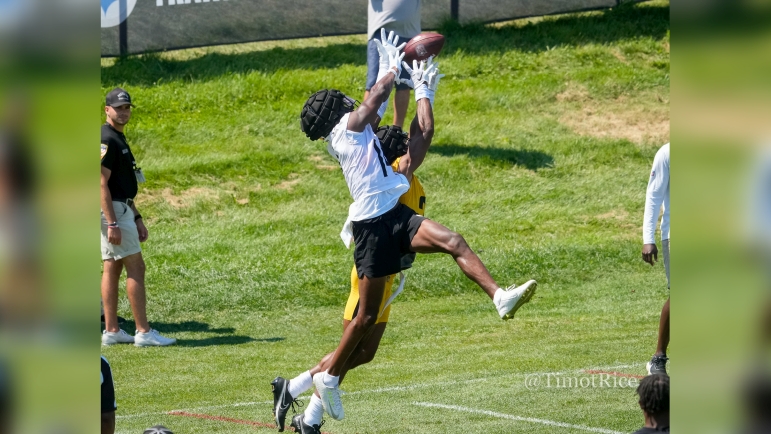 Another day, another strong showing for Pittsburgh Steelers rookie wide receiver George Pickens. It’s becoming a daily occurrence for the Steelers with their second-round pick in the 2022 NFL Draft.

Midway through the second full week of padded practices at Saint Vincent College in Latrobe, Pickens continue to raise eyebrows with his high level of play, dominating in one-on-one and team 11-on-11 sessions, flying through the air to make play after play for the black and gold.

Though he still needs to show it in preseason and regular season action, Pickens is the talk of training camp at this point for the Steelers, moreso than the three-way quarterback battle that’s currently happening between Mitch Trubisky, Mason Rudolph and Kenny Pickett.

While he’s making a ton of plays and looking like a legitimate starting receiver right away, Pickens isn’t surprising anyone inside the Steelers’ front office and coaching staff that evaluated him ahead of the 2022 NFL Draft, especially head coach Mike Tomlin.

“I don’t know that anything surprises me to be honest with you,” Tomlin said to McFadden, according to video via CBS Sports. “I was able to go to Athens and see his Pro Day, and sometimes that’s all you need from an evaluation standpoint. You get in person and you see things at ground level at real speed. I don’t think he’s doing anything here that myself and the coaching staff that went to Athens, Georgia, didn’t see at his Pro Day. He’s just a really talented guy.”

George Pickens makes spiraling catch against Cam Sutton back to back reps in 1v1. Danced on him after each grab. Pickens has A+ body control and tracking of the football. #Steelers

Leave it up to Tomlin to pour water on a rookie’s breakout. That’s just how it has to be though. That said, Pickens certainly has impressed, seizing upon his opportunities with Chase Claypool missing time with an injury and Diontae Johnson conducting a hold-in before now missing time with a hip injury.

That time on the field with a quarterback like Mitch Trubisky has allowed Pickens to showcase his talents. He’s starting to look like a future star overall, one that the Steelers can build their offense around moving forward.

However, it’s still relatively early overall in Pickens’ time with the Steelers, and it’s important not to set outlandish expectations. He’s showing exactly who he was at Georgia though, just like Tomlin stated to McFadden. Oftentimes, an in-person evaluation is all you need. That’s all the Steelers needed before selecting him at No. 52 overall, and it’s paying off in a big way so far.