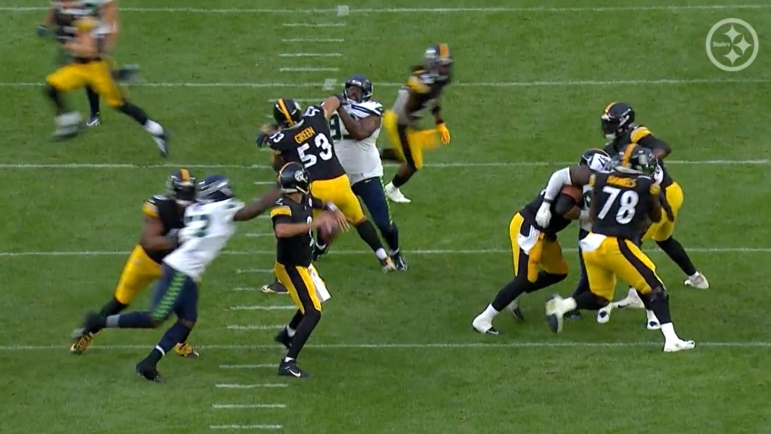 There isn’t a position on the offensive side of the ball that you couldn’t say is still very much a work in progress. Not even running back, or tight end. Certainly not quarterback. And absolutely not the offensive line.

While the unit played better than one might have expected to see around this time last year, the offensive line still left a lot to be desired, and we did see how better mobility from the quarterback position can mitigate some of their issues, something head coach Mike Tomlin addressed in his post-game remarks.

“We’ve got to keep them cleaner”, he said of the offensive line needing to protect the quarterbacks better than they did during the game, via the team’s website. Although they only surrendered three sacks, and only one in the first half with the first-team unit, there were several other plays where the quarterbacks had to move off of their point and rush their throw or scramble.

“We’re capable of that”, Tomlin added, citing the lessons they can learn from the night’s work. “The [Seahawks] brought some pressures, and that was good. We had an opportunity to see some pressures and have our protection from an assignment standpoint be tested, but I’d like to see our quarterbacks cleaner than they were tonight”.

Even Mason Rudolph’s 26-yard touchdown pass to George Pickens in the second quarter didn’t come from a clean pocket, though it actually drew a roughing the quarterback penalty. But, ideally, you don’t want defenders close enough to touch your passer, let alone rough him.

Things could have been worse if not for the ability of Mitch Trubisky, Kenny Pickett, and even Rudolph to move the pocket, as Tomlin alluded to. “We made some plays, particularly at that position, with our legs and so forth, and I’m appreciative of that also. Some of those things were able to be revealed because of it”.

While the Steelers did have roughly their starting offensive line intact for the game, there was one notable omission with Kevin Dotson inactive while recovering from a minor injury. The third-year veteran, who started all nine games for which he was healthy at left guard last season, is competing with last night’s starter, Kendrick Green, at the position.

The game marked the first in a Steelers uniform for new center Mason Cole and right guard James Daniels, however, while tackles Dan Moore Jr. and Chukwuma Okorafor are both adjusting to working with different guards than they had prior.

You can always want it to look better, but the offensive line certainly could have looked worse. Was the showing against the Seahawks good enough? Certainly not. But they have two more preseason games to clean it up before they have to do it when the scoreboard actually matters.