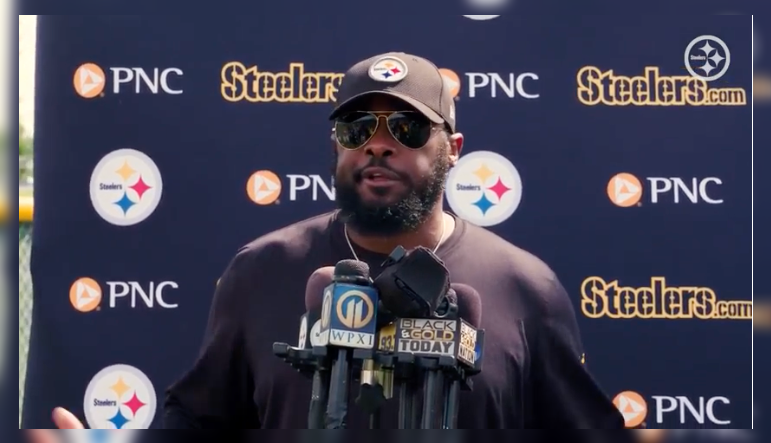 In recent years, the Steelers have seen themselves struggle in short-yardage situations. At practice today, the team ran through short yardage and goal line situations. In his press conference after practice, via a tweet from Steelers Live, Tomlin talked about the efforts in those situations.

“In short yardage and goal line and, there’s no way around that,” Tomlin said about plays that are physical. “When there’s a line to gain, and it’s of that nature, you get to know yourselves and each other pretty quickly. And, I like the efforts and the urgency relative to that segment brought today.”

Two key factors in improving offensively in short-yardage situations are having a running back who always keeps his legs moving and an offensive line that can generate push. The Steelers have one of the best power backs in the league in Najee Harris, but the problem has been the offensive line in recent years. Harris helped Pittsburgh last year in short-yardage situations, but there were still times when they couldn’t get enough of a push. With Kendrick Green moving out of the center spot and Mason Cole and James Daniels joining the offensive line, the hope is that the group is more powerful and just better overall.

On defense, Pittsburgh has traditionally done a good job of stopping teams on third-and-short, but the poor run defense last year bit them in the rear a few times in those short line-to-gain situations. That’s something the Steelers are making a point to fix this year, and with Tyson Alualu returning, along with the additions of Larry Ogunjobi and Myles Jack, I have faith the run defense, and therefore the short-yardage defense, will be improved from last year.

With going for it on fourth-and-short becoming more and more prevalent in the NFL today, Pittsburgh needs to be comfortable going for it in short-yardage situations. Being aggressive in that sort of situation can be the difference between a win and a loss, and the Steelers have to be able to feel as if they can convert at least third-and-two or fourth-and-two or closer situation. On the flip side, they need to have a defense that can get stops and get the offense off the field in the same situations and potentially get the ball back in plus territory.

Working on situational football and short-yardage and goal-line situations is important and it’s good that the Steelers are getting work in as they prepare for their first preseason game against Seattle on Saturday.