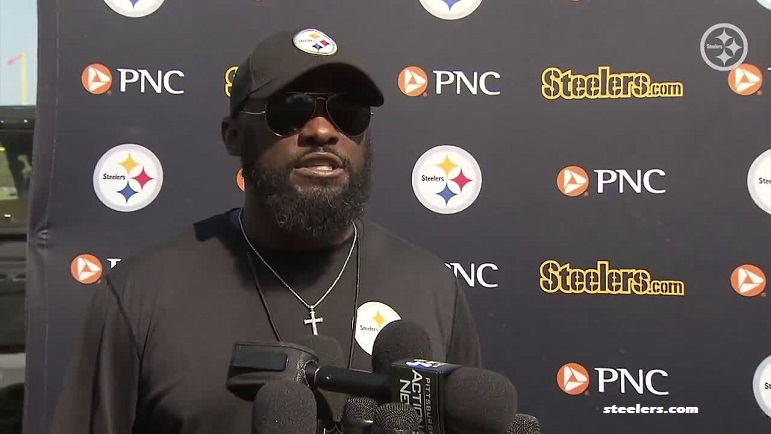 After practice at training camp today, Mike Tomlin was asked in his press conference (via Steelers.com) his impression of the wide receiver and defensive back matchups at practice.

“It’s ebb and flow. It really is, and the skill sets are different depending on the circumstance. And as you guys can see, we got a bunch of different types of receivers, tall guys, small guys with great stop and go. Oftentimes those skill sets really dictate the nature of the matchup. We were working in the red zone yesterday in the tight red, and we focused on a lot of jump balls to the bigger body guys,” Tomlin said.

“If you look at people working in the slot, you’ll see guys like 84 and 19 and 89, guys with great stop and go, trying to lean on those skills. And so a lot of the work, it’s the same cast of characters, but there’s a different emphasis based on the skill set of the people involved.”

The guys in the slot that Tomlin mentioned were Tyler Snead (84), Calvin Austin III (19) and Gunner Olszewski (89). Snead seems like he’s more a fit for the practice squad at this point, but both Austin and Olszewski should make an impact for the Steelers this year. Olszewski has a reputation as a returner, as he has just nine career receptions in three years, but maybe Pittsburgh can unlock something in him and make him viable in the slot. Austin III’s speed would benefit him in the slot, but he played on the outside a lot in college and he’s a guy the team could move around.

With Chase Claypool and George Pickens both being bigger receivers, it wouldn’t be surprising if the team tried to get them some jump ball opportunities this year. Claypool has traditionally struggled with jump balls due to his tendency to leave his feet, but hopefully in year three he’s worked on that and can be more of a weapon in those situations. Diontae Johnson will also likely play mostly on the outside, but he’s missed the last two days of practice with a hip flexor. Still, he’ll likely have as big a role as anyone receiver on the team, and he’ll be eager to show he deserves every cent of his new contract.

As a whole, the Steelers wide receiver room looks a whole lot different than last year behind Johnson and Claypool. It’s one of the team’s greatest unknowns, but the early returns seem promising, especially with Austin III and Pickens, and even guys on the bottom of the roster like Tyler Vaughns and Cody White.

With a change at quarterback and changes across the board at the receiver position, this Steelers offense might look a lot different. I’m certainly looking forward to it, and I can’t wait for Saturday night to see it in action against the Seattle Seahawks.