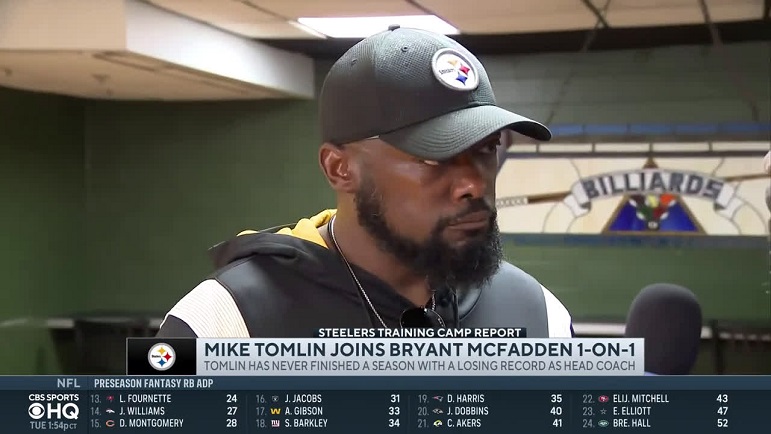 “They’ve all remained viable. They’re making it difficult for us. It’s tough to manage three capable guys, but they’re forcing us to do it because they’re making the necessary plays. They’re anticipating, the timing has been good. The accuracy has been good,” Tomlin said.

“Mitch’s silver bullet if you will, is his fluidity and mobility. He’s a really good athlete. Rudolph throws a really good deep ball. Number eight has been steady Eddie, Kenny P, I don’t think you can get him in an environment where he gets flustered and we were able to appreciate that because of proximity. We saw it at Pitt and, it’s been the same.”

While each guy brings something different to the table, whoever gives the Steelers the best chance to win this year will be the starter in Week 1. Tomlin said that right now, Trubisky would be the guy.

“We’ve been really transparent with the guys and we based our start on resume. Mitch has won in this league, the statistics bear that out. He has more experience than the others. And so we just thought it was appropriate to start there.”

That’s not at all a surprising statement from Tomlin given the fact that Trubisky has taken first-team reps throughout camp and has the most starting experience and most success as a starter. While things fizzled out in Chicago, he led the Bears to a 12-4 season and showed flashes of being a capable starter in the NFL. With a year behind Josh Allen, one of the best quarterbacks in the league, Trubisky is ready to show that again.

Meanwhile, Rudolph has starting experience, but he hasn’t been as successful as Trubisky. Still, by all accounts, he’s been impressive in camp so far and he’s the most familiar with the Steelers and how things run. He wouldn’t be the sexy option to start, but the team knows what they have in him.

Pickett is the least experienced, but he has the highest upside as a first-round draft pick. I think it’s unlikely he starts early in Week 1 just due to his lack of experience and that he’s probably a step behind Trubisky and Rudolph in terms of ability at this point in his career.

The Steelers have been taking things slow in their quarterback competition thus far, but with the first preseason game coming up on Saturday, they’ll get a look at how each guy fares against other competition. Obviously, training camp helps the team get a good look, but performing against another team with a bigger crowd and added adrenaline can help somebody take a step forward.

I would bank on Trubisky keeping his current standing as the team’s QB1, but regular season performance could dictate a change. If Trubisky struggles early, the Steelers could turn to Rudolph or Pickett, and might lean towards the latter if they fall out of playoff contention. However, this is a team good enough to make the postseason if they get good play at quarterback coupled with its defensive ability. There’s going to be a lot of pressure on whoever’s under center to perform, and it’ll be interesting to see if they can get good enough quarterback play to make some noise in the AFC.