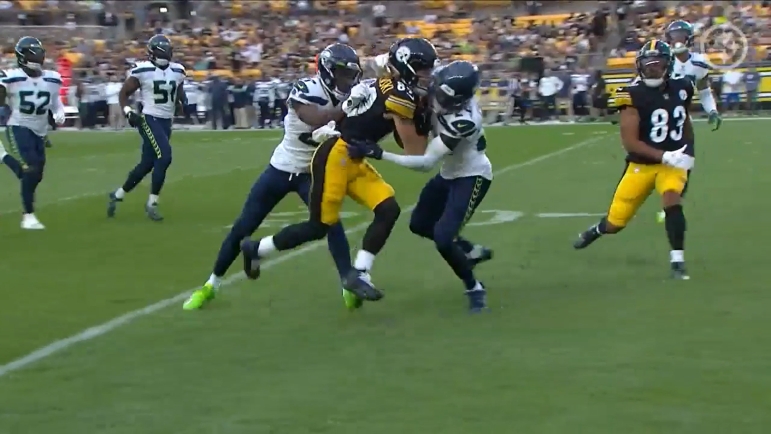 Most Steelers fans hardly batted an eye when the team announced the signing of Gunner Olszewski back in March. ‘Great, another returner’ they thought, perhaps, at most. As the offseason process speeds along and we approach the games that matter, however, it’s becoming increasingly apparent that the team views the fourth-year wide receiver as an offensive contributor, and he is showing why.

Though he played very sparsely offensively in New England’s offense that past three years, having only taken to the wide receiver position once arriving in the NFL, he has been demonstrating a knack for navigating the slot position, able to get open with relative efficiency and using his return abilities to eat grass in the open field. But there’s another quality that sticks out to head coach Mike Tomlin.

“I can’t say enough about the toughness that he displays”, he told reporters yesterday, via the team’s website. “I just think that that’s a distinguishing trait. It doesn’t matter what we ask him to do, he brings a type of spirit that’s attractive from a toughness standpoint, and you can’t have enough tough guys in this game”.

Tomlin volunteered the comments about his toughness when asked about Olszewski ingratiating himself to the offense generally and carving out a role for himself. While most of this would be communicated on the practice field, it did show up very early in the preseason game against the Seattle Seahawks.

On his first touch as a Steeler, the sixth play of the game, Mitch Trubisky found Olszewski on 3rd and 6 for a catch and run that went 25 yards. Turning upfield in the opposite direction his momentum would have taken him, he also made sure to finish the play physically, with contact, rather than going out of bounds, which he certainly could have.

And although there are certainly smaller players out there, Olszewski is not among the largest by any means, listed at 6’0” and 190 pounds, even if I suspect that he is actually a bit smaller than that. Although he’s about twice the size as Calvin Austin III.

The big question is how and when everybody sees the field, of course. The starting lineup should be Diontae Johnson, Chase Claypool, and rookie wide receiver George Pickens, who at this point is now basically the favorite to win the Offensive Rookie of the Year Award.

But how much will Matt Canada rotate his wide receivers? The quarterback could be a factor. Trubisky is projected as the starter for the opener, and he certainly has taken quite a liking for Olszewski on the grounds of his ability to get open.

But regardless of his size, he plays like a football player, first and foremost. And it should be no surprise that he’s not shy around contact, as he was a cornerback at Bemidji State, and I believe back in high school as well. He’s been on the other end of those tackles, so he should know a thing or two about finishing them.