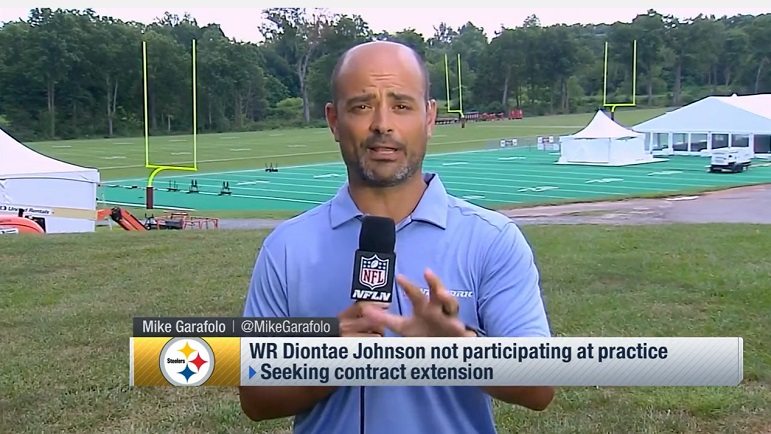 The contract situation with Pittsburgh Steelers wide receiver Diontae Johnson is now back in the forefront on the heels of new general manager Omar Khan being asked several questions about the team’s former third round draft pick out of Toledo during his Tuesday press conference. While Khan did predictably indicate on Tuesday that the team hopes to keep Johnson as a member of the Steelers moving forward, he gave no indication that a contract extension before Week 1 of the 2022 regular season is imminent.

Since Khan talked on Tuesday, Gerry Dulac of the Pittsburgh Post-Gazette reported that the Steelers and Johnson are not close to consummating any sort of contract extension and that the two sides effectively remain miles apart when it comes to the financials. That’s not a bit surprising. Dulac seemed to indicate that he doubts Johnson will ultimately sign a new deal by the time the Steelers open their regular season on September 11 against the Cincinnati Bengals. However, Mike Garafolo of the NFL Network said Wednesday morning that it is his opinion that the Steelers will ultimately get Johnson signed to a new deal prior to week 1 after first admitting that that he’s hearing there’s a lot of work to be done.

“But I still think something gets done before the start of the regular season here for Diontae Johnson,” Garafolo said Wednesday morning. “Maybe it’s a shorter deal than even some of the ones that we saw right there [A.J. Brown, D.K. Metcalf & Terry McLaurin], because he’s looking at it from the standpoint of, well, they’ve got the control via the franchise tag the next two years anyway, and you’re going into a year with a little bit of uncertainty at the quarterback position and a new system that we’re finally gonna see fully with Matt Canada. So, we’ll see where this goes, but I think in the end, something gets done with Diontae Johnson and the Steelers just don’t know how quickly.”

Quite honestly, Garafolo’s remarks should be deemed as speculation, if you haven’t already figured that out. As for Johnson possibly getting a shorter extension that Metcalf and McLaurin both received, I would be surprised that happened.

On Tuesday, Over the Cap posted a nice breakdown of some recent contracts signed by wide receivers that includes new money totals starting in Year Zero (2022), along with full guaranteed money amounts and other key metrics. This table of numbers presents a real nice look at what Johnson and the Steelers are both up against when it comes to attempting to get any sort of extension done by Week 1.

Here is the breakdown of the recent WR contracts in terms of cash flows and guarantee structure (guarantees for Brown are based on 4 years rather than 5) pic.twitter.com/4oQMcNIa8A

Personally, I don’t think that the Steelers have any interest in giving Johnson guaranteed money past 2022, meaning his base salary and signing bonus. If Johnson’s side is angling for $23 million in new money in Year Zero, which would be roughly $3.5 million less than what both Metcalf and McLaurin both received, his 2022 take would need to be right around $26 million (base and signing bonus). That would likely mean a signing bonus of around $25 million.

Should Johnson’s side be asked to only take fully guaranteed money in Year Zero (2022), it might be hard to also have him do so as part of a four-year extension. His side might contend that not having guaranteed money past 2022 should result in a shorter extension length. See the issues here?

Overall, I don’t think the Steelers would have a problem with signing Johnson to a deal that includes a new money average of around $20-$21 million. Where the issue comes in is the guaranteed money amounts and the length.

While I do believe that the Steelers would like to sign Johnson to a contract extension this summer, I think they will only do so if they get numerous concessions from the player’s side. Will a deal ultimately get done? My gut feeling all along has been that one won’t get done. That said, one could get done if Johnson’s side really wants it to happen. Stay tuned as there is still 39 days to go until the Steelers Week 1 game.

From Inside Training Camp Live on @nflnetwork on the #Steelers’ contract talks with WR Diontae Johnson, and why I believe an extension before Week 1 could happen. pic.twitter.com/0n5bz6SNUX