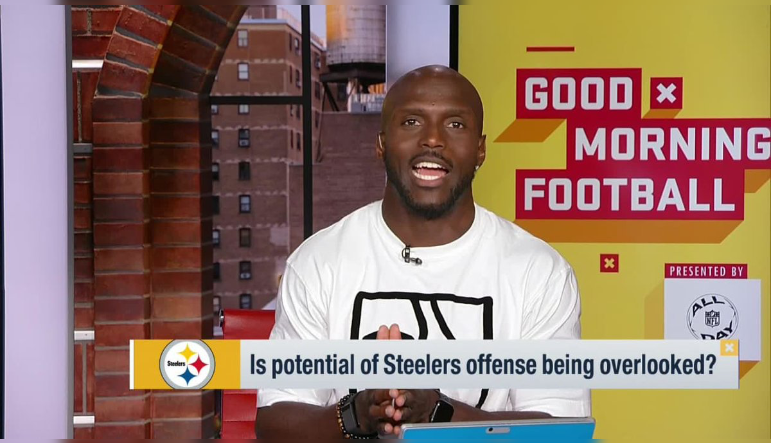 Heading into Saturday’s preseason opener at Acrisure Stadium against the Seattle Seahawks, all eyes were on the Pittsburgh Steelers’ offense under second-year offensive coordinator Matt Canada, in large part due to the quarterback situation overall, as well as the new-look offensive line.

Safe to say, the new-look offense delivered in a big way, generating some major buzz throughout the fanbase and the local media. That buzz continued Monday morning on NFL Network’s Good Morning Football as the panel of Kyle Brandt, Peter Schrager, Jason McCourty and host Jamie Erhadl discussed the performance of the Steelers’ offense in the preseason opener.

All offseason, the discussion surrounding the Steelers’ offense had to do with the quarterback situation and if the offensive unit could just be “good enough.” On Saturday, they were more than good enough, turning heads nationally thanks to how good the QB trio of Mitch Trubisky, Mason Rudolph and Kenny Pickett all looked throughout parts of the game, not to mention backup running backs Anthony McFarland and Jaylen Warren, and emerging rookie star wide receiver George Pickens.

In total, the Steelers’ offense racked up 409 yards of total offense on 67 plays in the preseason opener, averaging 6.1 yards per play while putting up 32 points in the win over Seattle.

On Monday, McCourty — an NFL veteran of 13 seasons — raised the belief that the Steelers’ offense could be more than what the general consensus thought after one impressive showing in preseason.

“We haven’t really focused on if this Steelers offense can be really good?” McCourty said on GMFB Monday, according to video via NFL.com. “Pickens looks to be the real deal, not only the touchdown, but the catch on the sidelines getting the feet in. Anthony McFarland, was fun to watch for me. Obviously, we know the Najee Harris show is what’s gonna be on the full screen, but as much as they want to run Najee Harris he’s going to need a break. McFarland was just…the speed, his ability to get in, break tackles, make something out of nothing…it was really enjoyable.

“For me, I think I was kind of focused more on, ‘they’re not gonna be as bad as they kind of look,’ but they could be a lot more than we think,” McCourty added. “…This Steelers offense, if the quarterbacks can play well — and Mitchell Trubisky looked well in his first preseason action, and Kenny Pickett you saw the way the fans reacted — those two guys…we may be able to get a lot more than I was thinking.”

It’s a bit much to react this way to a preseason opener, but based on how the Steelers’ offense looked throughout much of the last two seasons — especially in 2021 — there are definitely reasons for optimism moving forward. Second-year offensive coordinator Matt Canada has three quarterbacks that fit his system ideally in Trubisky, Rudolph and Pickett, which opens up the playbook entirely.

Right away on Saturday that was shown with the designed rollouts, play action passes, and more as the Steelers’ offense marched up and down the field throughout the game against the Seahawks, culminating in a last-second game-winning strike from Pickett to Tyler Vaughns, igniting the home crowd at Acrisure Stadium.

Again, it’s important to state that it was preseason action against a team that could very well be in contention for the No. 1 overall pick in the 2023 NFL Draft. But it’s very hard to not be optimistic coming out of Saturday’s performance – especially offensively – and wonder if the Steelers’ offense could be better than anticipated.